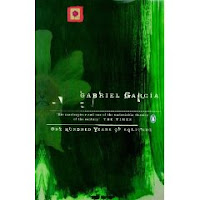 Gabriel García Márquez masterpiece tops poll of world literature
One Hundred Years of Solitude has most shaped world literature over the past 25 years, says survey
Alison Flood writing in The Guardian, 25 September 2009
Gabriel García Márquez's seminal novel One Hundred Years of Solitude is the piece of writing that has most shaped world literature over the past 25 years, according to a survey of international writers.
Barack Obama's memoir, Dreams from My Father, also makes an appearance on the list of favourite works chosen by fellow writers.
Indra Sinha, Blake Morrison, Amit Chaudhuri and 22 other authors were asked to pick the title that they felt had most influenced world writing over the past quarter-century. The survey was conducted by the international literary magazine Wasafiri – meaning "cultural traveller" in Swahili – which celebrates its 25th anniversary today.
Márquez's novel was the only book to be selected more than once. It was chosen by three authors: Chika Unigwe, Sujata Bhatt and the Ghanaian writer Nii Ayikwei Parkes.
Parkes said: "[It] taught the west how to read a reality alternative to their own, which in turn opened the gates for other non-western writers like myself and other writers from Africa and Asia.
"Apart from the fact that it's an amazing book, it taught western readers tolerance for other perspectives."
Sinha picked Vladimir Nabokov's Lolita "for Nabokov's astonishing virtuoso performance, which has never been excelled", and Morrison plumped for The Stories of Raymond Carver. "No creative writing course would be complete without it," he said. "Thousands of young writers have been taught to pare their work to the bone, just as Carver was by his editor Gordon Lish – though nobody can match Carver's genius for rhythm and nuance."
Poetry made a strong showing on the list of 25 titles: Chaudhuri selected Elizabeth Bishop's Collected Poems, which he first chanced upon in a Bombay library in the late 1970s. "[It] has had an enormous, if subtle, impact on how we think of poetry and language today," he said, calling it "a reminder that travel, exile, cosmopolitan irony, as well as a certain narrative of the self can be addressed just as well – if not better – through the means poetry has at hand (economy, form, the image, and a kind of grace) as they can by the novel or the essay."
Daljit Nagra picked Seamus Heaney's North "for its intensely lyrical and idiosyncratic focus on aesthetic resolutions to conflict", while Elaine Feinstein selected Ted Hughes's Birthday Letters, for creating "a new form of intimate poetry, quite different from Robert Lowell's confessional verse".
Salman Rushdie made the list twice, for The Satanic Verses and Midnight's Children, while VS Naipaul was nominated for A House for Mr Biswas, Ben Okri for The Famished Road and JM Coetzee for Disgrace.
Read Alison Flood's full report at The Guardian online.
Posted by Beattie's Book Blog at 3:55 pm