Daily Beast Seeks to Publish Faster
by MOTOKO RICH , New York Times, September 28, 2009
Having ramped up her metabolism from magazines to online journalism with The Daily Beast, Tina Brown now wants to speed up book publishing. 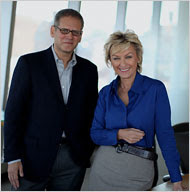 David Steinberger of Perseus Books and Tina Brown of The Daily Beast.
Photo byOzier Muhammad/The New York Times
In a joint venture with Perseus Books Group, The Daily Beast is forming a new imprint, Beast Books, that will focus on publishing timely titles by Daily Beast writers — first as e-books, and then as paperbacks on a much shorter schedule than traditional books.

On a typical publishing schedule, a writer may take a year or more to deliver a manuscript, after which the publisher takes another nine months to a year to put finished books in stores. At Beast Books, writers would be expected to spend one to three months writing a book, and the publisher would take another month to produce an e-book edition.
In an interview in her office at The Daily Beast, which is owned by Barry Diller’s InterActive Corporation, Ms. Brown said she believed books often missed opportunities to attract readers because the titles took too long to come to market.
“There is a real window of interest when people want to know something,” Ms. Brown said. “And that window slams shut pretty quickly in the media cycle.”

Ms. Brown said that Beast Books would select authors from The Daily Beast’s cadre of writers, most of whom are paid freelancers, to write books with quick turnarounds. She said she planned to publish three to five books in the first year. Other publishers have already experimented with releasing quick e-books before issuing a print version and have seen only modest results. “Dumb Money: How Our Greatest Financial Minds Bankrupted the Nation” by Daniel Gross, a writer for Newsweek magazine who expanded on some of his articles for a book that was first published in an electronic edition by Free Press, a unit of Simon & Schuster, sold 4,000 copies in paperback, according to Nielsen BookScan, which tracks about 70 percent of retail sales.

PublicAffairs, another imprint of Perseus, issued an e-book version of “The New Paradigm for Financial Markets” by George Soros two months before releasing a hardcover, selling 50,000 copies of the print version.

Ms. Brown, a former editor of Vanity Fair, The New Yorker and the ill-fated Talk magazine, said there was a gap between online writing and full-length books that was no longer being fully met by a dwindling market for magazines.
The full story at NYT.
Posted by Beattie's Book Blog at 9:28 pm

This is smart, although it will be interesting to see how successful it is. I hope they are. This is how the Internet and ebooks should be used, get it out there while it's relevant. As someone interested in the stories of the financial meltdown in the states from a business/economics view it is good to read stuff, particularly backgorund and analysis, as it happens, makes one more informed. Being relatively short and to the point will make them more readable by more people I hope. In some ways this is just a modern version of the very old monographs that were published on current topics, or ideas.

I wasn't aware of thedailybeast.com but now that I am will probably be visiting on a regular basis.