First ever PEN/Pinter Prize goes to ‘unmistakable and passionate’ poet

The first PEN/Pinter Prize will be awarded on 14th October to the poet and playwright Tony Harrison.

The prize has been established by the writers’ charity English PEN in memory of the Nobel-winning playwright Harold Pinter, pic left. It will be shared annually between a writer who exemplifies Pinter’s commitment to ‘the reality of our times’, and an imprisoned writer of courage. The judges for the inaugural PEN/Pinter Prize were Antonia Fraser, Nicholas Hytner, Mark Lawson, Tom Stoppard, and Lisa Appignanesi, President of English PEN.

Tom Stoppard said “When Tony’s name came up it pretty much stopped the discussion. I think we all felt immediately that he was exactly the writer for the PEN/Pinter prize, and PEN/Pinter was exactly the prize for Tony. Harold would raise a glass to that.” 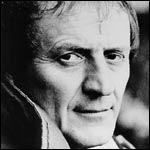 Nicholas Hytner, Director of The National Theatre, said: “Tony Harrison (pic right) is a public poet whose verse engages consistently with the world around him, the world from which he sprang and the ancient world from which he has learned most. His own Yorkshire vernacular is the clay from which he sculpts often ferocious verse that demands to be spoken out loud. His voice is unmistakable and passionate.”

The PEN/Pinter Prize will be presented at a public event on 14th October at the British Library, the home of Harold Pinter’s archive.
Tickets to the event are available from the British Library box office via http://boxoffice.bl.uk/ or by calling 01937 546546.
Tony Harrison will accept the prize in a speech to be published in a limited edition by Faber & Faber following the event.
In his speech, Harrison will announce the winner of the international category, chosen from a shortlist compiled by Carole Seymour-Jones, Chair of English PEN's Writers in Prison Committee (WiPC), and Moris Farhi, former International WiPC Chair, of English PEN's ‘honorary members' - imprisoned writers around the world. Each writer will receive £1,000.

Jamie Andrews, Head of Modern Literary Manuscripts at the British Library, said:
"The British Library is proud to be the home of Harold Pinter's archive, a pre-eminent collection that includes important papers relating to his work with, and commitment to, English Pen and the causes they defend. As such, we are delighted to host the inaugural PEN/Pinter Prize, and congratulate Tony Harrison on being the first recipient of this major new award. Letters in the Pinter archive demonstrate the affection and admiration in which the two held each other and their work, Harrison writing to Pinter at one point that: ‘you have always inspired me more than anyone else’.”
Posted by Beattie's Book Blog at 6:03 am