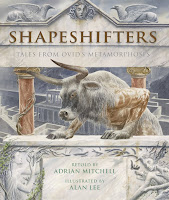 On 3rd October 1-3pm, The Weta Cave – Wellington will be having an Illustrator/book signing.

US-based Alan Lee who’s currently in NZ working on The Hobbit film, will be signing copies of his new book SHAPESHIFTERS.
Shapeshifters: The Metamorphoses of Ovid
by Adrian Mitchell • illustrated by Alan Lee
'Adrian Mitchell makes these tales of human overeaching and natural vengeance sharply up to date. Children will be entranced, but there's plenty for adults too.' Andrew Marr
Bursting into life in the hands of Adrian Mitchell, here are 30 of the brightest, lovliest and
most powerful myths ever written. Re-created from Ovid's Metamorphoses in stories,
ballads and headline news, they sing aloud on the page. Breathtaking artwork by the
most acclaimed fantasy illustrator of our time transforms the storied into a living, breathing
children's classic to bewitch a new generation raised in a world of special effects.
* Kate Greenaway-winning illustrator Alan Lee won an Oscar in 2004 for conseptual
design on Peter Jackson's Lord of the Rings film trilogy.
* Adrien Mitchell, playwright and poet, who died last year, has a big following
* Haunting illustrations by the acclaimed fantasy illustrator Alan Lee.
Adrian Mitchell (1932-2008) was the first jounalist to interview the Beatles and caught the
spirit of the time with his anti -war poem 'Tell me lies about Vietnam'. He adapted many
foreign classics for the Royal Shakespeare Company and the National Theatre.
His last three books were Shapeshifters, Tell me Lies (Bloodaxe Books) and Umpteen Pockets (Orchard Books).
Adrians death in 2008 was a sad loss to literature, to the theatre and to children everywhere.
Shapeshifters publication date: October 2009
AUS$ Pric:e $29.95
NZ$ Price: $34.99
ISBN: 9781845075361
Binding: Hardback
Posted by Beattie's Book Blog at 8:09 pm