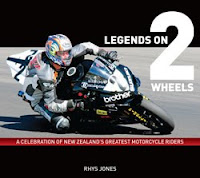 If you stop and think about it, it does seem quite astonishing how many great riders, designers, engineers and innovators have been involved in giving New Zealand an amazing history and rich heritage in two-wheeled motorsport.
For a small country geographically isolated from the main centres of motorcycle racing, New Zealand has produced a disproportionate number of the world’s top riders. More World Championships have been won by Kiwi motorcyclists than by competitors in any other sport in this country, with nine riders winning 35 World Championships. I reckon that is remarkable.
Others have come breathtakingly close in both on- and off-road events. Riders such as Hugh Anderson, Graeme Crosby, Ivan Mauger, Ben Townley, Josh Coppins and Aaron Slight — fiercely competitive men who have driven themselves to the level of excellence and enjoy international respect. And, then there’s Katherine Prumm, who is leading the charge for women riders.
There are the innovators, the designers and the engineers who developed their craft in the great Kiwi tradition of ‘can do’: men with vision, such as John Britten, Steve Roberts and Ken McIntosh. Men who built motorcycles that won respect world-wide.

In his handsome new hardcover new book, Legends on 2 Wheels: A celebration of New Zealand’s greatest motorcycle riders, Rhys Jones covers forty-three of New Zealand’s best, beginning with Percy Coleman who set a new Australasian speed record in 1916, right through to the kiwi greats racing today, including Josh Coppins, Bruce Anstey, Ben Townley and the King brothers.
Brief biographies are accompanied by shots of the riders taken by some of the best in the business of motorsport photography over the years. Jones has provided some insightful and fascinating background sections that take the reader on a journey to New Zealand road-race circuits, the Isle of Man and beyond.
ABOUT THE AUTHOR
Rhys Jones is a long-time motor cycle rider and has ridden a vast collection of different types of motorcycles, many owned, some road-tested for magazines, and others borrowed.

I remember him, as will any others, as a prominent television presenter, producer and journalist going way back to when he first started as a television journalist with NZBC in Auckland on 'Town and Around' in 1967 followed by 'This Day' in 1970. He was that impossibly good looking guy!
Then followed several years working in television news and current affairs in the UK with BBC Wales, presenting for the BBC News in London before moving into production and directing roles.
He returned to New Zealand for the opening of TV2 in 1975., was a presenter on the first Telethon and Presenter of 'Opportunity Knocks' for two years. He produced 'Sunday Best', 'World watch', 'Police 5', and 'Access' before joining the 'Eye Witness' team in Current Affairs.

He spent most of the 1980's in Australia working initially with the Australian Broadcasting Corporation as a senior journalist and presenter on nightly 'Nationwide' Current Affairs programme before becoming a freelance writer and director with more than 26 documentaries to his credit.
He moved to Singapore in 1990 and presented and produced the 'Asian Business Report', the first independently produced information programme to appear on Singapore Broadcasting Corporation.
Jones finally moved back home to New Zealand in 1997 where he wrote and produced 'Four tales of the dragon' a four part documentary series before being appointed founding Editor of New Zealand Motorcycle Trader and News, thus fulfilling a life long passion for motorcycles.

In 2000, he began work on his first book ‘Taking to the Road’ a history of motorcycling in New Zealand, which was published by Random House September 2002.
He left the magazine business in August 2006 after eight years and wrote his second book ‘On Track - a history of motor racing at Pukekohe’ published in 2008.
Now established as a specialist and highly regarded writer in the world of motoring. Legends on 2 Wheels is his third book.

Footnote:
When I received his book to review I met up with the author and reminded him of our association way back in the late 1970's when I was at Penguin Books and he was at TVNZ and I used to introduce visiting authors for interview. 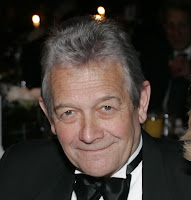 He immediately turned to his book case and pulled out a Penguin title 'The whores of war' in which he had written on the inside of the cover - 'interview with the author Derek Roebuck for After Ten November 3rd 1977'.
The Bookman was impressed. And the man is just as handsome all these years later! See photo right.
Congratulations Rhys on a fine book.
Posted by Beattie's Book Blog at 7:53 am