Hunter from the Heartland 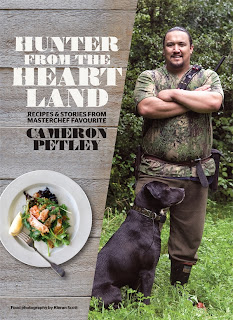 Cameron Petley is a father of five who lives in Putaruru in central Waikato. Before becoming one of the finalists in series two of MasterChef NZ, he worked at a chicken farm.

Hugely popular,  Cameron is an unassuming country bloke who cooked what he caught and hunted for his family. What’s more, the judges thought he was a ‘genius with flavour’, able to understand what ingredients worked together perfectly — without any training at all. Judge Josh Emmet said that Cam’s venison was the best he’d ever tasted.

Although he didn’t win the series he was seen as the ‘people’s choice’ and considered to be unlucky to have been eliminated and there was a public outcry when Cameron was sent home and even a ‘bring back Cameron’ Facebook page started.

Cameron has always been interested in food and how to get the best out of flavours, as he explains,  ‘Even from a really young age, while I was sitting there eating whatever had been cooked up for us, I’d always be thinking, How can I make it taste better?’
He has a natural instinct with food and takes great care with his flavour combinations, ‘When I’m cooking venison, I do try to think about what the deer would be eating in the wild, as what an animal eats has such an effect on the flavour of the meat.’

‘That’s the way I learned to cook. For me, it’s always been about improving on the natural flavours. When I was on MasterChef, everyone else would be grabbing twenty ingredients and I’d only have seven — but I’d win the challenge. I just think about finding the perfect balance, and getting the flavours right. I don’t reckon you need all that fancy stuff if you know how to put the right ingredients together.’

Cameron thinks it important to use ingredients that people can understand. ‘Before I went on the show, I never used to read cookbooks. It was mostly because you’d open them up and every recipe would have so many ingredients. I wouldn’t even know what some of the stuff in the recipes was, so I’d just give up. What I wanted was to use ingredients that every person in New Zealand could go and buy quite easily — stuff that you can find in the local Four Square.’

‘Add those simple ingredients to food that you can get yourself — hunting, fishing or foraging — and you should have everything you need.’
He grew up learning his cooking, hunting and gathering techniques from family and tries to share the same experiences with his own kids, taking them hunting whenever he can.  ‘It’s a great way for them to learn about where food comes from and I want them to have the same sort of experiences as I did when I was growing up.’

With some of his recipes Cameron has taken traditional Maori hunting and cooking techniques and adapted them to create his own versions. ‘I like using traditional Maori recipes but putting a spin on them to make them more appealing. Our food culture has such a long history that it’s great to bring it to a broader audience.’

Head Chef of the very popular refurbished Putaruru Hotel, people come from miles around to taste his food. Here he gets the opportunity to share his love of food and eating wild game and different seafood at the Masters Table — the restaurant at the Putararu Hotel.

And now Cameron shares his stories and recipes with this book. Hunter from the Heartland contains over fifty excellent recipes for fish, seafood, pork, lamb, beef and poultry plus there are some great yarns from Cam about how he got into hunting, what it was like for him growing up in New Zealand — riding horses bare-back with his cousins, going bush, catching eels — how he ended up auditioning for MasterChef and what has happened since — including meeting Rick Stein.

This is Cameron’s first cookbook. The publishers have kindly given me permission to reproduce one of Cameron's recipes and this appears below: 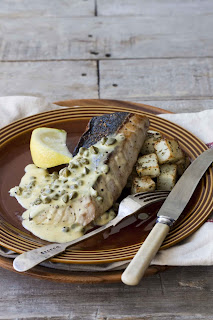 The salty, tangy caper sauce makes this dish a sure hit. You can use any fresh fish instead of hāpuka.
Preheat oven to 220°C. Line an oven tray with baking paper.
For the potatoes, cut sides off potatoes to get a square or rectangle shape. Then cut into 1cm cubes and wash under running water to remove any starch. Pat dry in a clean cloth.
Toss potato cubes with a splash of olive oil, rosemary, thyme and a generous pinch of salt and pepper. Place on lined oven tray and roast for 15 minutes. Set aside and keep warm.
Decrease oven temperature to 180°C.
For the hāpuka, score skin on fish, rub with oil and season with salt and pepper.
In a medium-hot ovenproof frying pan, cook hāpuka skin side down in butter and oil for 3–4 minutes until skin is crispy. Turn and cook for a further 2 minutes. Transfer to oven and cook for another 4 minutes. Set aside and rest for 5 minutes.
For the sauce, in the same pan used to cook the fish, add cream and capers and bring to the boil. Add lemon juice and reduce until sauce is thick. Keep pan moving so cream doesn’t boil over the sides.
Arrange potatoes on plates with fish on top. Drizzle with sauce and serve with your favourite salad.

Posted by Beattie's Book Blog at 7:17 am