The Reading Agency is delighted to announce that a record 23,500 less confident adult readers registered for its 2012 Six Book Challenge programme. That’s 1,000 more readers than anticipated, with figures set to rise further as public libraries, colleges, workplaces, prisons and other settings around the UK conclude and evaluate their Challenge activity for this year.
Launched in 2008, when 7,000 people took part, the annual Six Book Challenge encourages less confident readers to develop a new reading habit and improve their skills at the same time. Participants are invited to pick six reads of their choice and complete a reading diary in order to receive incentives along the way, a certificate and the chance to enter a national prize draw. Ninety per cent of survey respondents this year said that they were more confident about reading after taking part in the Six Book Challenge.

The Six Book Challenge is run by independent charity The Reading Agency to help tackle the UK’s continuing skills deficit. Recent Government figures show that 15% (5.1 million) of the working age population in England are still at or below the literacy level expected of an 11 year old. (See “Notes to editors”.) Top authors back the Six Book Challenge to help get more adults reading more, including Adele Parks and Andy McNab, who are official Six Book Challenge ambassadors.

Of the record-breaking 23,500 people who signed up for the 2012 Six Book Challenge, 12,000 came through public libraries, 6,000 through further education and sixth form colleges, 4,000 through prisons and
1,500 through workplaces. And 44 organisations around the UK have qualified for new awards to mark the number of completers they supported. Northampton College and public library services in the London Borough of Brent and Blaenau Gwent in Wales have won gold awards for achieving more than 150 completers, with 11 organisations winning silver awards (100+ completers) and 35 winning bronze (50+ completers).

Genevieve Clarke, Six Book Challenge programme manager for The Reading Agency says: “It’s fabulous that the Challenge has increased in scale by another 30% this year but there’s a long way to go. It’s such a simple scheme and yet its impact is enormous. Everyone should be doing it!  So please get in touch with us if you’d like to support the Challenge in any way.” 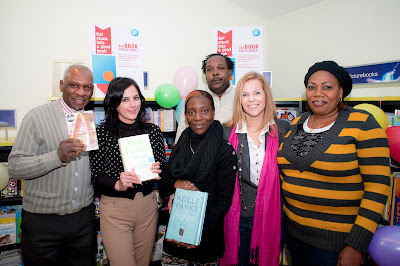