Headlining the front page of the New Zealand Herald this morning is this story:

Henry's book lights a fire - By Vaimoana Tapaleao
Sir Graham Henry's admission that he wondered whether match-fixing was to blame in the All Blacks' shock quarter-final defeat in the 2007 World Cup has fuelled an international debate about sportsmanship, fairness - and sour grapes.

In a new book out today, the coach - who won the Cup last year - lays bare his agony after the shock loss to France.
And he admits that he pressured the New Zealand Rugby Union to push for an International Rugby Board inquiry after he considered whether match-fixing might have been involved.
More at NZ Herald.

The Sunday Star Times ran this banner on their front page yesterday: 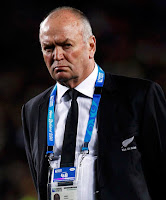 Read the SST story here.  There is also an excerpt from the book in the SST.        Photo right - Iain McGregor/Fairfax NZ

Graham Henry -  Final Word  By  Bob Howitt - Harper Collins - Published today - $49.99
My review copy arrived by courier today, the publishers had a strict embargo on it which reading the reactions to it I can understand why.Haven't had a chance to other than dip into at the moment, a handsome hard-cover book with lots of interesting photographs.

Last night TV3's 60 Minutes was lead by a lengthy London interview with Anne Perry by Guyon Espinor; the NZ Listener now on sale carries Diana Wichtel's interview of Anne Perry in a 7 page cover story, and I see the August issue of the Australian Women's Weekly (on sale today) has a four page excerpt from the book. Both of these magazines carry photographs from the book.

Both these headline-grabbing titles are published by Harper Collins NZ who must be thinking all of their Christmases have come at once. It is not often that NZ non-fiction titles grab the headlines in this way. Booksellers should be sure to   have plenty of stock on hand and to display both titles prominently.