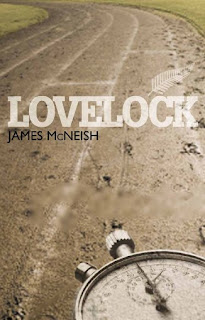 ‘A great and illuminating book ... I think it is the best book about anything connected with athletics I have ever read’
Roger Dunkley, Achilles Club, London

‘James McNeish has injected a little art into the arid world of sports writing ... A marvellous crux of fiction and reality’
Times

Now regarded as a classic this new edition of Lovelock is republished with ‘Berlin Diary’, a journal written while researching the novel, and an afterword, which contains a sobering commentary on the famous runner’s death.
Jack Lovelock has been called the first modern athlete. He became famous internationally when he broke the world record to take the gold medal in the 1500 metres event at the Berlin Olympic Games in 1936.
In 1949, a few days before his 40th birthday, Jack Lovelock was killed when he fell beneath a train in New York.
The enigma of his death becomes the key to McNeish’s quest for the ‘real’ Lovelock – a man who, in the author’s words, ‘covered his traces as adroitly as he ran’.