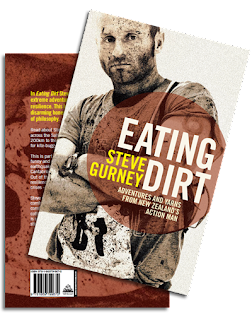 Steve Gurney loves to live at the edge of his comfort zone; it’s when he feels most alive. And in his new book Eating Dirt he challenges others to do the same.

Gurney believes that New Zealand society has morphed into an ‘OSH culture’; one where children are ‘cotton-wooled’ and everything is over-regulated, including adventure sport. His challenge to us is to let children take risks — even if that means they fall out of trees occasionally — ‘eat dirt’ during a game of playground bull-rush and make mistakes, so that they’ll know how to find their limits in later life; as he has done.

Gurney is the living embodiment of a ‘V commercial’: high octane and fun. His adventures are extreme, his innovations are pioneering, his dreams are big. He is also very resilient. Like many Cantabrians, he lived through the major Christchurch earthquakes, lost property and had to take stock of his life. This journey led him to connect with his local community in surprising new ways and inspired him to undertake extensive research into the area of resilience, so that he could share his practical tips for recovery after any crisis.

Eating Dirt takes up the story where his bestselling autobiography Lucky Legs (2008) left off. Here, we find Gurney about to undertake his latest extreme adventures, including a world-record crossing of the Sahara Desert by kite-buggy, while trying to avoid land mines, terrorists, corrupt border officials, gear breakages and bone-breaking rocks — one of which almost took him out — and climbing Aoraki Mount Cook the hard way.

Eating Dirt encapsulates Gurney’s philosophy for winning in adventure and achieving those important life goals before it’s too late. His grit, determination, candour and humour resonate throughout and inspire the reader to make mole hills out of mountains. 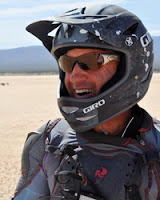 About the author:
Steve Gurney is an adventurer, inventor and motivator. A qualified engineer, he is an ex-professional adventure athlete turned professional motivational speaker. Gurney won the ‘Coast to Coast’ race a record nine times and twice raced mountain bikes for New Zealand at the world champs. He once waxed his entire body for ‘Dancing with the Stars’ and was awarded an MNZM for his services to Endurance Sport. Eating Dirt is Steve Gurney’s second book.