8:15 James Henry
James Henry is Managing Director of the Sag Harbor Group, and former chief economist at the international consultancy firm McKinsey & Co. He was lead researcher for a report commissioned by the Tax Justice Network which outlines how the super-rich are hiding at least $21 trillion in accounts outside their home countries.
http://www.sagharbor.com
http://www.taxjustice.net/cms/front_content.php?idcat=148

8:45 Katrina Batten
Radio New Zealand presenter, producer and engineer Katrina Batten is in London, and will be watching the Olympics opening ceremony and concert in Hyde Park.

9:05 Fred Pearce
Fred Pearce is the environmental and development consultant for New Scientist magazine. He writes regularly in The Guardian newspaper, and is the author of a number of books. His latest is The Landgrabbers: the New Fight Over Who Owns the Earth (Eden Project Books, ISBN: 978-1-905-81174-8).

9:45 Matthew Akers
Matthew Akers is a filmmaker and former painter and sculptor. His latest documentary, Marina Abramovic: The Artist is Present, documents the 2010 career retrospective of the performance artist during her three-month show at the Museum of Modern Art in New York. It is screening at the 2012 New Zealand International Film Festival, once more in Auckland (30 July), and in Wellington (2, 4 and 5 August), Dunedin (9, 11 and13 August), Christchurch (18 and 20 August), and Palmerston North (27 and 28 August)
http://marinafilm.com/
http://nzff.co.nz

10:05 Playing Favourites with Coralie Winn and Ryan Reynolds
Coralie Winn and Ryan Reynolds are the co-founders of Gap Filler, a creative urban regeneration initiative started in Canterbury in response to the 4 September earthquake, and revised and expanded after the 22 February quake. The Gap Filler Charitable Trust will receive $100,000 over two years from Creative New Zealand towards regeneration projects they are developing in vacant spaces around Christchurch. Their most recent project, an interactive poetry installation on a Colombo Street wall that visualises the regeneration of Christchurch as an unwritten poem, was launched on National Poetry Day.
http://www.gapfiller.org.nz/
https://www.facebook.com/Poetica.christchurch.

11:05 Brian Boyd
Brian Boyd is University Distinguished Professor in the Department of English at the University of Auckland, and is the world’s foremost authority on the works of Vladimir Nabokov. His new book is Why Lyrics Last: Evolution, Cognition and Shakespeare’s Sonnets (Harvard University Press, ISBN: 978-0-674-06564-2). 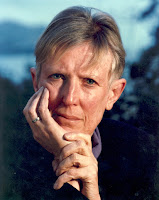 Elizabeth Knox has been a full time writer since 1997. She has published ten novels, three autobiographical novellas and a collection of essays. Her best known books are The Vintner’s Luck, and The Dreamhunter Duet (Dreamhunter and Dreamquake). She will discuss the work of Margaret Mahy (right).
http://www.elizabethknox.com/

More information follows on Saturday's guests, repeats of previous interviews, next week's programme, and this email list. As this is live radio, guests and times may change on the day.
Email: Saturday@radionz.co.nz
Web page: http://radionz.co.nz/saturday


***********
On Saturday 28 July 2012 during Great Encounters between 6:06pm and 7:00pm on Radio New Zealand National, you can hear a repeat broadcast of Kim Hill’s interview from 21 July with Stu Barr of Goodnature on pest traps.

On Sunday 29 July 2012 at 4:06pm and Tuesday at 9:06pm you can hear a broadcast of the second programme of Talking Heads 2012: Paradise Regained, a series of discussions about science in New Zealand. This week, Dame Anne Salmond and Kim Hill explore the possibility of a new Enlightenment that recaptures the wide-ranging curiosity of New Zealand’s early exploring scientists while transcending western modernity by drawing upon other intellectual traditions, including the relational thinking characteristic of Maori and other Pacific life worlds.
http://www.radionz.co.nz/national/lecturesandforums/talkingheads