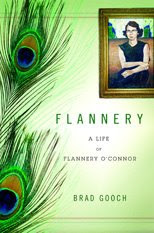 What Was With the Peacocks and the Gothic Fiction?
By JANET MASLIN writing in the NYT, Published: February 22, 2009
Brad Gooch’s rapt, authoritative “Flannery” is the first major biography of a writer who died 44 years ago. Where is the flood of other biographical material about this mystical, ornery, ardently admired Southern writer?
FLANNERY
A Life of Flannery O’Connor
By Brad Gooch
Illustrated. 448 pages. Little, Brown & Company. $30.
Related
Times Topics: Flannery O'Connor
There has been at least one other account of O’Connor’s life (written by Jean W. Cash and deemed merely “a step in the right direction” by Publishers Weekly in 2002). And there have been many book-length critical studies of her work. But O’Connor has been long overdue for the major biography that Mr. Gooch has written. “Flannery” reveals not only why its brilliantly persnickety subject warrants such attention but also why it has been so slow in coming.
Read Maslin's full piece at the NYT.
Posted by Beattie's Book Blog at 7:19 am