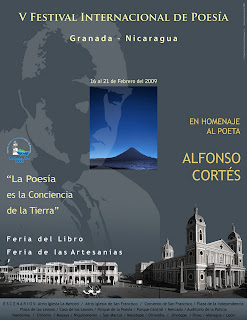 NZ POET DAVID HOWARD REPORTS ON HIS RECENT TRIP TO NICARAGUA
A tentative swabbing of my pack for explosive residue as an armed policeman stood over me, then four hours as a free man in Los Angeles on a Saturday that found both the Museum of Modern Art and the Walt Disney Concert Hall closed – hardly an auspicious beginning to a week of grace.

When I landed in Managua Airport an immigration official was waiting with my name on a laser-printed sign; I was guided past an exhausted crowd, my passport stamped in less time than it takes to say ‘Ruben Dario’, then ushered past beggars to a shuttle, where antique Beat Ann Waldman embraced me like the long-lost twin of Kerouac.

If I say that Nicaragua is a country of wonders then I have to acknowledge that every country has them. But the wonder here is that such an economically depressed, politically tensioned people can summon a prancing enthusiasm for beauty. Here poetry is a Utopian residence that every man, women and child appears to visit regularly; some even try to live there. The song that moves a New Zealand preschooler continues to move a Nicaraguan labourer, teacher, or businessman. As a minor poet from the bottom of the world I felt humbled and, yes, inspired.

With 130 poets from 54 countries, the programme was an overflowing well of words. I was asked to take part in the Burial of Lies & Deceit burlesque funeral procession, where I read rather too delicately to an indelicate audience; they wanted to speed up while I wanted to slow down. I felt disappointed until fellow poet Gioconda Belli, former Director of State Communications for the Sandinista administration she is now an outspoken critic of, said how much she admired my tender delivery. It was rare and therefore to be prized in a country of shouts, squeals, and gunfire. 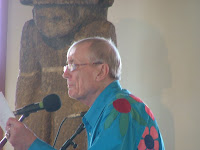 The next night, under the antique gun-tower of Fortaleza La Polvora, I read with Yevtushenko (pic left). He stepped out of the cover of my Penguin Modern European Poets edition. If I found his delivery unexpectedly kitsch, I couldn’t ignore the booming applause. When my name was called I gulped, glanced at Ernesto Cardenal’s intent face, then launched into the peculiarly New Zealand lines:

Rusted barbs are more dangerous than bright ones.
The wire fencing the well
wants the signature of a child’s thigh,
the blood of one more explorer.

By the time my Spanish translator had delivered her version I knew this festival was, in part, min 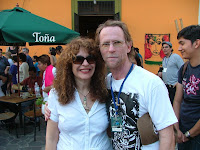 My final reading was in San Marcos. I appeared with the impeccably mannered Obediah Smith (Bahamas), having been blessed first by a Roman Catholic priest. When we returned to Granada it was to hear an ecstatic Arjen tell how he had been required to kiss the fourteen contestants for Miss Nicaragua 2009. Our colleague, Marko Pogacar (Croatia) looked down: “No… F**k…I never get the luck.”

I didn’t kiss any contestants – but I felt I got the luck. The V Festival Internacional de Poesia de Granada 2009 was a blessing beyond words.
Posted by Beattie's Book Blog at 3:27 pm