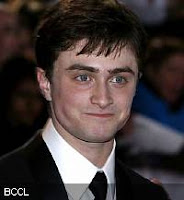 Final Harry Potter film to release in 2011
26 Feb 2009, The Times of India report:
The magic had to come to an end sometime. The eighth and final movie in the "Harry Potter" series is to be released on July 15, 2011, the Hollywood Reporter trade newspaper reported.
The studio is splitting Harry Potter and the Deathly Hallows , the seventh and final book in the series about the boy wizard, into two movies because of its length.
Part I is to debut on November 19, 2010, while the final movie comes out eight months later. If the final film keeps to its release date, it would have to compete with The Avengers , a superhero action movie starring Robert Downey Juniour that is also to debut that weekend.
Five movies based on the books by J.K. Rowling have already been made with stars Daniel Radcliffe, Emma Watson and Rupert Grint. The sixth, Harry Potter and the Half-Blood Prince, is due in theatres on July 17 after its release was postponed from November.
Warner Bros chief Alan Horn said summer starts made for a bigger box office and the screenwriters strike last year caused many productions to be delayed and made new release dates necessary. All three of the final Harry Potter movies are to be directed by David Yates, who also directed Harry Potter and the Order of the Phoenix.
Posted by Beattie's Book Blog at 8:09 am