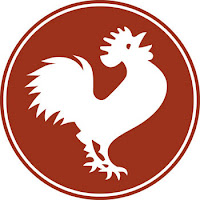 The 2009 Tournament of Books Is Coming Soon
The Fifth Annual Tournament of Books site will launch on Monday, March 9, 2009
The 2009 ToB Contenders List
The 2009 Judges & Brackets
All titles 30% off at Powells.com
ToB T-Shirts
The Rooster on Facebook, and on Twitter
Previous years: 2008, 2007, 2006, 2005
All questions or media contacts:talk@themorningnews.org
FOOTNOTE:
My thanks to Anna Hodge at Auckland University Press for bringing this to my attention. It hadn't crossed my radar but here is what she had to say about it:
It’s a US book competition where 16 of the biggest literary novels of the year get matched up in (completely arbitrary, and frivolous, but hilarious) head-to-head reviews, the winners advancing to the next round until they reach the finals. It’s immensely entertaining, but it’s also quite a useful guide to what the literary big-hitters are in the States. Previous winners include I think The Brief Wondrous Life of Oscar Wao, The Road and Cloud Atlas.
Anyway, if you don’t already know about it, hope you enjoy! I followed it last year agog after stumbling across it via The Elegant Variation, so I’m looking forward to this year’s Tournament.
Posted by Beattie's Book Blog at 7:59 am