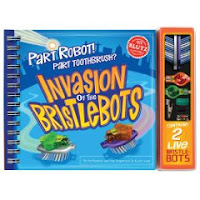 Bloggers Bristle, Scholastic Bends
By Karen Springen -- Publishers Weekly, 2/23/2009
Who would think a motorized toothbrush head would generate a publishing controversy?
It started at the New York Toy Fair last week, when Scholastic’s Klutz division unveiled Invasion of the Bristlebots, a March 2009 book packaged with two tiny toothbrush robots. Bloggers at the fair noticed that the book failed to credit Lenore Edman and her husband, Windell Oskay, with popularizing and naming the Bristlebot. (Since December 2007, more than two million people have watched the couple’s “How to Make a Bristlebot” video on Youtube; many others have read the instructions on their Web site.
Immediately, bloggers from the so-called Maker and DIY (do-it-yourself) communities unleashed a flurry of posts. A typical one, on blog.makezine.com: “Sad to see something for fun take on evil overtones of corporate thought theft.” Others on the same site acknowledged the possibility of innocence: “Given how stressful publishing is these days, and how shoestring those types of projects can be, I wouldn’t be surprised that they were completely unconscious of the need to attribute.”
As a result of the brouhaha, on Friday evening Klutz editor Pat Murphy posted a message on a Scholastic blog. In it, she said that she and Edman spoke on Friday, and talked about “ways that Klutz could acknowledge the exceptional work that Evil Mad Scientist Laboratories has done in Bristlebot research,” including acknowledgment in the next printing of the book and on Klutz’s Web site. Murphy said that her biggest regret in the event “is that I missed the opportunity to work with the amazing and innovative folks at Evil Mad Scientist Laboratories.
The full story at PW.
Posted by Beattie's Book Blog at 7:24 am