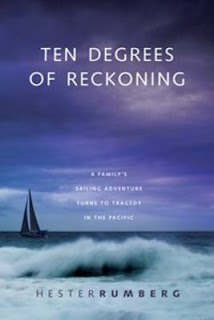 This profoundly powerful and inspirational memoir is being published by Penguin Books NZ on 1 March.

The second mate made a fatal error, based not upon calculations or technology or even experience. He became flustered as his ship was approaching the sailboat and shouted out a manoeuvre to the helmsman. Ten degrees, and a family was destroyed.

In 1993, Judith and Michael Sleavin and their two children set out to live their dream: to sail around the world. But one night, a freighter off the coast of New Zealand altered its course by a mere ten degrees. And changed everything.

After surviving forty-four hours in the water, with a back broken in several places and paralyzed below the waist, Judith miraculously survived. Doctors would later say she suffered one of the worst cases of post-traumatic stress syndrome ever documented. News of the collision made headlines around the world, but, distraught, Judith never talked to the press. Her body was broken, and so was her soul.

Twelve years later, Judith turned to her best friend, Hester Rumberg, and asked her to write what was too painful for her to write. The result is a gripping, unbelievable yet true story of one family’s love, of profound loss, and of a remarkable woman who decided to live when others might have decided otherwise. But always it is a stunning account of survival, a meditation on the strength of friendship and community. It is a universal tale of how any of our lives might be unexpectedly altered, how we might have to change what we hope for, and how we can move forward in times of tragedy.

Hester Rumberg is an experienced ocean sailor with thousands of nautical miles under her belt. When the tragedy befell the crew of the Melinda Lee, together with Judith Sleavin she established the Sleavin Family Foundation, a non-profit organisation dedicated to promoting maritime safety throughout the world. In her other life, Dr Rumberg is a board-certified oral and maxillofacial radiologist. Hester was, and will always be, the godmother of Annie Rose Sleavin.