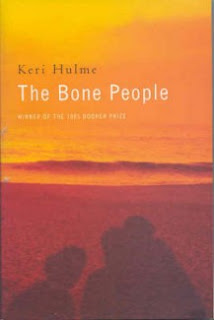 Keri Hulme won the Booker Prize in 1985 for The Bone People, a unique example of Maori magical realism. Since then, there have been many rumours of another novel from the reclusive New Zealander and her publisher Picador has occasionally spoken optimistically about an imminent new work, to no avail.


However, last week, Ms Hulme broke silence with the news: "While I did indeed receive the offer of a large advance [generally quoted as being 'in 6 figures'], due to circumstances beyond my control [life, the universe and everything] I haven't yet picked up more than a quarter of it." In other words, she has not delivered any new manuscript pages.


Her fans will hope that hard times encourage Ms Hulme to pick up her pen once more. "Royalties decrease over time," she reports. "I now earn way less than the average wage," adding mysteriously: "I still keep quite a number of people in employment ... "
Posted by Beattie's Book Blog at 1:57 pm