Novelist and father of New Journalism sells 190 boxes of manuscripts and letters, which will be available to researchers 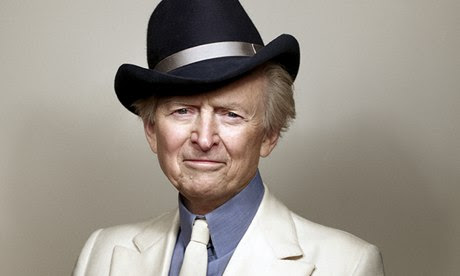 He is known for inventing New Journalism, mixing literary techniques with straight reporting, and for skewering New York social types in his best-selling fiction, and now the New York Public Library has bought an "incredibly rich" collection of Tom Wolfe's notebooks and other papers for $2.1m (£1.3m).

There are original drafts of his 1987 debut novel The Bonfire of the Vanities, and more than 10,000 letters from 1955 onward, including personal notes from friends and fellow authors such as Hunter S Thompson, William F Buckley, and Gay Talese.


The collection of about 190 boxes is filled with notebooks of interviews, drawings, and research, draft manuscripts; and outlines of works such as The Electric Kool-Aid Acid Test, and The Right Stuff. They will become a permanent part of the library's collection, available to researchers.


"I couldn't be more delighted," said Tom Wolfe. "I've inhabited The New York Public Library so steadily since the very day I came to New York in 1962 to work – all of three blocks away – at the New York Herald Tribune, I feel like my archive is not moving anywhere. It's going home."

The notebooks "comprehensively document Wolfe's development as a writer", and "offer ample evidence for investigating the techniques he employed to achieve some of the characteristic devices of New Journalism, including scene-by-scene construction and extensive character dialogue", according to a New York Public Library statement.


"Tom Wolfe's unique and innovative style of reporting, as well as his insightful and sharp observations, have made him one of the most notable writers of post-war America," said NYPL President Tony Marx. "This incredibly rich archive will give researchers a wealth of new information on his writings, but also on broader topics such as journalism, politics, and culture. The New York Public Library is the perfect place for these
Posted by Beattie's Book Blog at 5:15 am