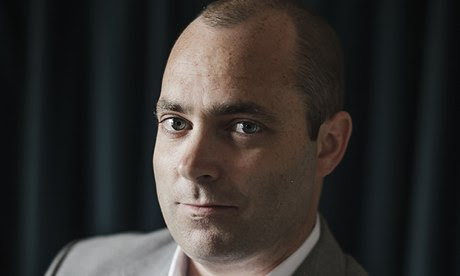 The novelist Donal Ryan has won the 2013 Guardian first book award with an angry portrait of rural life in post-crash Ireland, The Spinning Heart.
Speaking during the ceremony at Tate Modern in London, the writer said he found it difficult to believe that he had won.
"I can't believe it," he said. "I know everybody says it, but I really can't."
He dedicated the award to all writers "working at their beginnings".
"Of the many obstacles that stand in the way of a first book as it makes its precarious way into the world and into its readers hands," he explained, "fear is often the biggest and the most difficult to surmount. Fear of not being good enough, of not being able to say what we mean."

Born in a north Tipperary village in 1977, Ryan wrote the first draft of the novel in the summer of 2010, as economic collapse and deep cuts left one in three under the age of 30 unemployed.
Told as a set of interlocking short stories, Ryan summons up a chorus of voices struggling to make ends meet in a village near Limerick – an out-of-work foreman, a single mother living on an brand-new estate full of empty houses, an ex-apprentice heading off to Australia to look for work. These first-person accounts explore the scrabble for work in austerity Ireland and the bitter conflicts which blight families from generation to generation.

Writing in Guardian Review earlier this month the author explained how the characters articulate "their frustrations, fears, desires and sadness" one by one.
More
Posted by Beattie's Book Blog at 5:36 pm