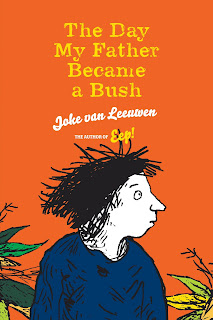 The Day My Father Became a Bush by Joke Van Leeuwen (Gecko Press) has just received a starred review in Kirkus Reviews ahead of its release in the US.

The review says it is a “brilliant, eerily engrossing evocation of war as it brushes up against youth”.

The Day My Father Became a Bush is clear-eyed and off-beat illustrated novel about a girl surviving in a baffling world at war. The author, Joke Van Leeuwen, is one of the top children’s writers in the Netherlands. She has won many awards, including the prestigious Theo Thijssen Prize, the triennial Dutch State Prize for youth literature.
The book was translated by Christchurch, New Zealand-based Bill Nagelkerke, a writer, librarian, reviewer, and former member of the international jury for the Hans Christian Andersen Awards. He won the Storylines Margaret Mahy Award in 2013 for his significant contribution to children’s literature and literacy.

See the book at Gecko Press online: http://www.geckopress.co.nz/ProductDetail.aspx?categoryid=142&productid=408
Posted by Beattie's Book Blog at 11:58 am