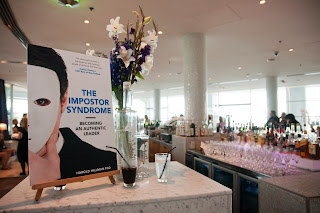 Leadership expert and debut author Harold Hillman PhD couldn’t have been more delighted with the stellar success and turnout for the launch of his book, The Impostor Syndrome: Becoming an Authentic Leader, on Monday evening. And he was equally thrilled to be a published author at last, judging by his beaming smile as he signed scores of books. Jeremy Eyles from Whitcoulls Downtown was on hand to sell copies and was run off his feet for the duration, selling out well before the launch ended.

The Hilton Auckland’s swanky Bellini Bar was full to overflowing as more than 130 guests, many of them top business executives, gathered to celebrate with Harold Hillman and pay tribute to a remarkable leader, teacher, friend and colleague. The room fairly hummed with lively conversation and laughter as guests happily mingled, enjoying oysters and fine wines. (I’ve been to many book launches in my time, but none as elegant or fun. To my mind, Hillman knows how to party and has set a new benchmark in how to launch a book!)

Andrew Thorburn (CEO, Bank of New Zealand) was MC for the evening and did a superlative job of entertaining and informing about Hillman the man and business leader, sharing anecdotes and paying tribute to his acumen and the high regard in which he is held by so many in the corporate world. Thorburn highlighted the authenticity of Hillman’s leadership, his warmth and humanity, comments which elicited ready agreement from the assembled guests.

In officially launching The Impostor Syndrome, Margaret Sinclair, Business Partnerships Publisher at Random House New Zealand, recalled what a dream Hillman had been to work with; “he seemed almost suspiciously perfect until I realised that this was a man who was walking his talk – he was showing all the attributes of an authentic leader – ready to listen to advice and adapt and learn while still sticking to his principles and the things that mattered to him most”.

In response, Hillman gave one of the most gracious and moving speeches I’ve ever heard, extending gratitude to the family and team that stands behind him. He said, “Thank you everyone for being here.  This is what real joy feels like. I believe in blessings and I believe I’m in the middle of one now. And the real joy is that we’re here because there’s something about authenticity that compels people together. Tonight is about celebrating what is unique about each one of us, and celebrating the liberating force of imperfection.”

Significantly, Hillman spoke with great affection for his father and the positive role model that he had been, encouraging he and his siblings to read from an early age. Rather than précis what Hillman said so eloquently, I will simply share some of his words with you. “One hundred thirteen years ago, a child named Milton Hillman was born in a small city south of Atlanta Georgia.  Milton Hillman was our father.  He was born 35 years after slavery was abolished in the U.S.  That heinous institution was replaced with a more subtle, but nevertheless explicit form of racism that made it illegal to educate black children, particularly in the South. These children were to work the fields, rather than occupy classrooms. Even the unenlightened oppressors knew that vast power could be sparked through education. So the premise that sat under their oppression was that, if you can’t read, you’re less likely to be curious about alternate realities. So my father was never educated in the formal sense of anything close to what we know today. But he learned at a very young age that there must be something in a book that they didn’t want him to know about.  And, like anything that is banned from the hands of a child, his curiosity turned to an obsession to read books, for there is something about a book that is both powerful and empowering. And at a very young age, he snuck away, often unbeknownst to his own parents, to learn how to read.

And that’s a lesson our father taught us at a very early age. He would put books in our hands, even if he didn’t read them to us, he would sit Renae and me on his lap and we would look through the pictures, and he would get us talking about all these cool places in the world.  And for me, those books helped implant a vision in my head, at a very early age, that life is about living, and living is about exploring the outer bounds of possibility, and that constraints on what is possible live largely in our own minds.

So you can appreciate that tonight, one hundred and thirteen years after his birth and 23 years after he died, to present to you a book with my father’s surname on it, has special significance beyond my wildest dreams.  And it’s a testimonial to the power of parenting.  If you tell your children they will do great things, they will probably do great things. To follow my father’s legacy, don’t have regrets that your voice is more about constraining, rather than enabling, the possibilities that can take your own children to exciting chapters in their own life stories.”

And that is what The Impostor Syndrome is all about. Encouraging us to be ourselves; believing that we can do great things, even though we’re far from perfect.

Concluding the speeches and formal part of the launch, Sir Henry van der Heyden (Chairman, Auckland Airport) remembered when he first met Hillman while working for Fonterra. Fresh off the plane from New York and sporting an ear-ring, van der Heyden thought that Hillman wouldn’t last six months. Van der Heyden then proposed a champagne toast to Harold Hillman, “the man who proved him wrong.” 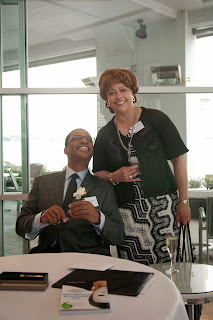 Author and his proud sister Renae
Posted by Beattie's Book Blog at 9:44 am