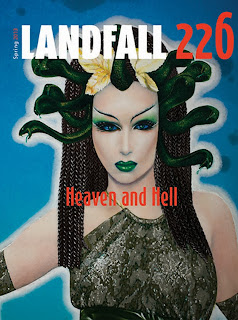 This fiery, celestial issue of Landfall transports us to paradises, purgatories, limbos, netherworlds, infernal regions and realms beyond.  Edited by David Eggleton, Landfall 226 contains some of the best contemporary imaginative local writing.

Siobhan Harvey won the Kathleen Grattan Poetry Award 2013 with a collection of poems about her autistic son. Landfall 226 contains the judge’s report on the award.  This issue also features the winning entry in the 2013 Landfall Essay Competition, ‘Winter’, by Tim Corballis, an erudite, lyrical and wide-ranging look at the personal, political and cultural, as well as metereological implications of the word ‘winter’. Among other essayists, New Zealand expatriate Janet Holst provides an account of life in the Islamic city of Muscat, on the Gulf of Oman.