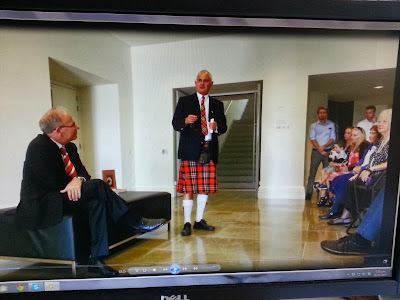 David McGill introduces Mayor Len Brown to the audience attending the launch on November 19 of his book The Slightly Mysterious Little Drummer Boy Who Became Mayor of Auckland about his great-grandfather William Richard Waddel, Mayor of Auckland in the 1880s. David noted that the city at the time was little more than the area of the mayor’s funeral procession, from St Mathew’s in Hobson Street up and along Karangahape Road and into Symonds Street cemetery. The book features over 40 images of the mayor’s time when he brought in trams, beautified Albert Park and laid the foundation stone of this magnificent French Renaissance Auckland Art Gallery where the launch is being held. David rates the building the jewel in the city’s heritage crown.

Mayor Brown welcomes the four generations of the mayor’s family, including the only surviving granddaughter, six great-grandchildren, eight great-great-grandchildren, and singles out among the other guests former Auckland Mayor Dame Cath Tizard, Auckland historian Graham Bush and playwright Roger Hall. He says the book interested him in the humble drummer boy origins and reflections on the times by the author. It was of particular interest to him because of its accounts of council activities back then. Mayor Brown said the book should be in all local libraries, it is a beautiful and easy read.

David thanked the mayor with a signed copy of his rail journey around New Zealand, The G’Day Country Redux, in recognition of Mayor Brown’s promotion of rail in the region. Dr Michael O’Leary wrote the railway poems in the rail book and in recognition of Mayor Brown’s rail promotion has written for this occasion ‘Ode to Len Brown’, which David reads, then shakes the mayor’s hand to general acclaim. 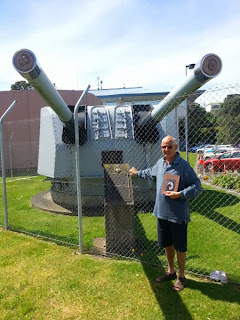