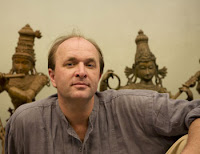 IT IS difficult to tell what drives William Dalrymple more: his passion for history, his love of India or his enduring fascination with religion.
Either way, the celebrated historian and travel writer is at his exuberant best when I talk to him, ranging across all three.

His historical passions are so profound, his cultural embrace so broad, it's as if the populations of countless past and present civilisations have taken up residence alongside him in his farmhouse on the outskirts of Delhi.
Here they vie for attention with his artist wife Olivia, their three children, several goats, a dog and a loquacious pet parrot.

But as he talks about his new and seventh book Nine Lives: In Search Of The Sacred In Modern India, you sense not just the scholarly interest in religion that has coloured, sometimes driven, his previous narratives but his utter thrall to the personal stories that gave rise to it.
It is impossible not to be profoundly moved by the stories of those he chronicles in Nine Lives.
From the beautiful young Jain nun who wishes only to ritually fast to the death, to an elderly Tantric practitioner who drinks from skulls, it's a book that never fails to astonish, to beguile, as it journeys to the outskirts of mainstream religion, keeping company with folk poets, dreadlocked sadhus, minstrels and theyyam dancers.
"I was very interested to look at religion not from a theological point of view or even a devotional point of view," he says, "but primarily through the prism of an individual's life, to see how religion had diverted, even subverted that person's path in life. And it seemed to me, over and over again, that these incredibly moving stories just came pouring out and I just didn't want to interfere with them."

He is quick to say, too, that chronicling the lives of these nine individuals took him back to his origins as a travel writer, travelling rough with his notebook but in all other respects, he says, it is "a very deliberate" departure in style and form from his previous books.
Since kickstarting his career with his acclaimed travel bestseller, In Xanadu, at the age of 22, Dalrymple has kept to writing about India and the Middle East consistently for 25 years.
"Religion is a constant," he happily admits. "It seems to be something I can't quite escape."
It was during a chance trip to India as an 18-year-old that he first found himself "completely gripped by the country and haven't been let go since".
Read on.

Posted by Beattie's Book Blog at 7:41 am