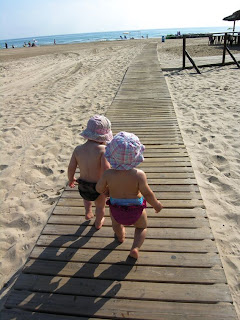 uld be easy just to describe this book as a luscious large hardback collection of utterly gorgeous photographs. That would be an accurate description but oh my goodness the book is just so much more than that.
It is, as editor/publisher Blackwell says in his splendid introduction, a self-determined and independent reassertion of humanity’s enduring capacity for intimacy, laughter and kinship.............the images here are effusive, poignant and far-reaching, yet, ultimately, incredibly intimate.

Well said Mr.Blackwell. Put another simpler way, this is a book that makes the heart sing. I have to admit I was positively aglow after the two hours I spent between the book’s covers last evening.

The publishers have given me permission to post a couple of images to the blog but of course there are over 150 extraordinary images in the book and I cannot possibly do justice to the photos as they appear in the book. However it will give you a small taste.

Pic left above - two small girls walking along a boardwalk on a beach in Spain by J.B. Russell
Copyright-J.B.Russell.
At my request they have also provided me with editor Blackwell’s introduction which is reproduced in full below even though it is a longer piece than I normally post to the blog.
I found it interesting and I hope you do too.

INTRODUCTION FROM THE BOOK

Twelve years ago I stumbled across a copy of The Family of Man at the MoMA bookstore in New York. It was the book of the landmark 1955 exhibition curated by Edward Steichen. I was immediately inspired by the global scale of Steichen’s masterpiece, and I felt deeply moved by the images and their ability to transcend time and geography by virtue of their universal subject matter: the fundamental human capacity and need for love. I wondered what a collection of contemporary images would look like, and whether – almost fifty years later – it would be possible to piece together a comparable collection chosen from images from every country in the world.

With the benefit of youthful naivety, and equal measures of sincerity and enthusiasm, I embarked upon a journey towards finding out. With encouragement and advice from my family, friends and colleagues, I developed a plan for a new collection called M.I.L.K. Support was sought from my visionary publisher-boss, Tim Hely Hutchinson, and two years later the project was launched in the form of an epic competition involving photographers from all of the world’s 192 countries, and a world-record prize.

The scale of this “photographic event” was enormous, but the concept was simple: to search the globe for images that captured spontaneous human moments of intimacy, laughter and kinship. Ultimately, the competition attracted over 40,000 entries from 17,000 photographers, Pulitzer Prize winners, leading professionals and amateurs alike, from 164 countries. In a dedicated space we called the “Milk Shed”, we accepted entries by the sackful. Some came as prints, some as negatives, some as handmade packages, most with stories; all somehow wrapped in the ephemera of human life.

The judging process took months and carried a heavy responsibility – how to choose one person’s moment over another? With the help of some extraordinary colleagues, and, in particular, the legend magnum photographer Elliot Erwitt, we finally settled on 300 winning images that became the original M.I.L.K. collection.

It was first exhibited in New York on 11 July 2001, in the elegant yet egalitarian surrounds of Grand Central Terminal. Many of the photographers and some of the subjects of their pictures attended the launch from around the world to celebrate with us, and for a joyous night we were the family of man. It was one of the most extraordinary evenings of my life and it provided a very personal moment with my own family – one that I will treasure forever.

In the days that followed, many people walked through the maze of photographs we had constructed, and viewed the M.I.L.K. collection projected onto an immense screen. Some cried, others laughed. As they moved through the exhibition their shadows were cast on to the backs of other images, a subtle interplay of static image and movement. Here was humanity writ large and writ small, in the moments captured on film and in the people moving freely around them. Moments were exhibited and moments were experienced.

In a bitter irony, the same space in Grand Central Terminal that housed the M.I.L.K. exhibition was used as an emergency blood bank on 11 September, just two weeks after the exhibition closed. Though there would ultimately be little requirement for their donations, people queued to give blood to assist their fellow New Yorkers. The poignancy of this event is at the core of M.I.L.K. and what it represents: our need to believe that there is something that unites us all as humans, something intrinsic within us that urges us to give selflessly, love generously and live without regret.

This brief retelling of M.I.L.K.’s history provides a neat veneer over the reality that the journey leading to it’s creation was not without moments of despair and significant financial difficulty. We always said we’d never do it again, but projects as enriching and rewarding as M.I.L.K. are hard to find, and as the tenth anniversary of the original competition approached we simply couldn’t resist the challenge and attraction of seeking to create another collection.

We announced the Fresh M.I.L.K. competition in August 2008, and in contrast to the original competition we conducted it entirely via the World Wide Web. After nearly ten years, it was with considerable anticipation that we downloaded the first batch of images in January 2009, and began the judging process. Unlike the entries we received a decade ago, there could be no lovingly stitched cloth packages. But they came to us packaged in different ways, wrapped in words, seeming to carry with them the subtle fragrance of people and places close by and far away. 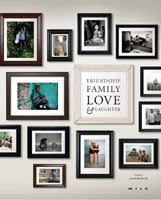 With the technological advances of the last ten years it was a surprise to see that so many of these new images had been shot in black and white. Subtle and classical, the black and white image stands resolute as the favourite medium for M.I.L.K.’s photographers. Could it be something to do with the way it strips unnecessary colour from compositions and made us look closer? The way it emphasises hard-earned wrinkles, sets shadows into dimples, dances light upon smiles and delineates emotion?

Among the entries were some familiar names – those of previous M.I.L.K. contributors, their new entries marking the passage of time. M.I.L.K. contributor and Pulitzer Prize winner John Kaplan’s entry struck a personal chord for me: a self-portrait taken to celebrate the remission of his cancer; the thick hair he wore at the M.I.L.K. launch now lost, but his spirit indomitable.

This time Elliot Erwitt had the sole responsibility of choosing an ultimate winner: one image that encapsulated Fresh M.I.L.K. On pages 20-21 you can view his choice by Victoria Vaisvilaite Skirutiene from Lithuania. Candid, yet beautifully composed, it captures a private moment shared between a father and his daughter as he seeks to lighten her mood during a break in a long journey from Lithuania to Russia in a campervan.

This new collection celebrates the tenth anniversary of M.I.L.K. But it does more than that. Through the lenses of nearly 150 photographers, Fresh M.I.L.K. not only continues, but expands the experience that was M.I.L.K. It is both a celebratory sequel and a self-determined and independent reassertion of humanity’s enduring capacity for intimacy, laughter and kinship.

The images here are effusive, poignant and far-reaching, yet, ultimately, incredibly intimate. Their extraordinary power comes, ironically, from their very ordinariness. They speak a common language punctuated by casual gesture, exquisite tenderness and natural insouciance.

I have learned many lessons through the journey that has been M.I.L.K., the most profound of which has come through the process of assessing the previous decade. In the last ten years of my life the personal moments that stand out are those I have shared with the people I love. Ultimately, through the course of any life, it is love that survives, nurtures and endures.

I salute all of the men and women – the brilliant and generous photographers from all corners of the globe – who have shaped this project. We feel privileged to publish your work, and we have done our best to honour it with this book. I wish to express my gratitude to my wife Susanna, my family, friends and colleagues who have travelled the road with me since M.I.L.K. was just a dream. I am particularly grateful to Elliot Erwitt who once again gave generously of his expertise and experience by choosing the first-place winner; to Jacqui Blanchard, whose talent and professionalism have made staging a world photography competition look easy; to Don Neely for his friendship and help during the judging; to Cameron Gibb, the ultimate designer of exquisite books; to my brother Paul and to Ruth Hobday – my ever-generous partners who support me and keep our company afloat in different ways everyday – and, finally, to the myriad others who have contributed to M.I.L.K. throughout the years, including you as you turn these pages: all these moments of intimacy, laughter and kinship belong to you. 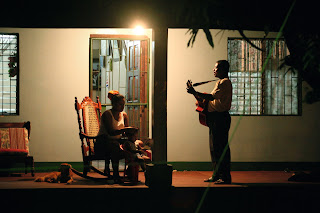 Footnote:
Geoff Blackwell appropriately salutes the photographers in his introduction to the book and as a footnote The Bookman salutes Blackwell himself for his vision, determination, tenacity, ability and style. His publishing is unique on the New Zealand publishing scene and he and his partners should be very proud of their publishing achievements.

Pic above right by Moshie Shai is one of my favourites although it is so small here it does not do justice to it. Much more impressive, and of course much bigger too in the book. Copyright Moshie Shai.

I came to your blog from Google Images. The pic. of two girls on a beach brought me here. I wanted to use this pic for my blog and was trying to trace its original source. May I request you to provide me the e-mail address of Mr.Russel so that I can request his permission?

Incidently I am an Indian but presently in Auckland. My blog is in my mother tongue Gujarati. I invite you to visit my blog http://www.bhajman-vartalap.blogspot.com/
Thanks.