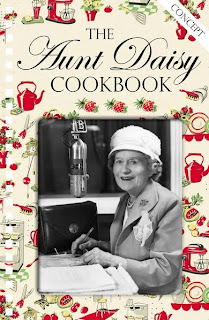 Three generations of New Zealanders responded to that radio greeting from Aunt Daisy every morning at 9 ‘o’clock. Thousands of tiny children learned to repeat it after her, and later their own children did the same. Her listeners were cheered by her unquenchable optimism - she could always find a patch of blue sky on the stormiest morning.

For over a quarter of a century, Aunt Daisy was one of New Zealand’s best-loved radio personalities. Aunt Daisy’s cookery books have also become a national phenomenon with her tried and true recipes used in every household through the years.
A complete list of her titles with publication dates and publisher details appears below. Older people in the book trade will find the list especially interesting.

The Aunt Daisy Cookbook was the last book ever produced of Aunt Daisy’s recipes. It was compiled by her daughter Barbara Basham and has proved to be one of New Zealand’s all-time bestselling cookery books. It was first published in 1968 and then reprinted 21 times between 1970 and 1994. Containg over 700 recipes, it is a great collection of classic New Zealand dishes. What could be more kiwi than Mangatainoka Christmas Cake, Lyall Bay Dressing and Stewed Pukeko?

All our favourite childhood recipes, from Bacon and Egg Pie and Meatloaf, to ANZAC biscuits, and foolproof Chocolate Cake, are held lovingly within these pages. Just leafing through the pages will make you want to whip out a mixing bowl and get cooking.

Aunt Daisy’s recipes are simple, practical, economical and as useful today as when they were first published. Now, home cooks can once again be helped and encouraged by Aunt Daisy’s know-how, practicality and unwavering optimism.

All royalties from the sale of this book go to the Barbara Basham Medical Charitable Trust for research in New Zealand.

could the Harvison and Marshal published books predate the Whitcomes ones?
My 2/- Aunt Daisy's cookbook mentions her being 'late of 1ZR'

I thought she may have put it together while the team was trying to take over 1ZB.
No mention of Fred collating.

The ads are different style also.

"Aunt Daisy’s New Cookery No. 6, Whitcombe & Tombs, Christchurch, 1951."
According to two examples I've seen, this was actually the fourth revised edition, and the cookbook was actually originally published in 1947.

Aunt Daisy also published at least 15 different books I know of that were not recipe books. This involved everything from household hints,ideas, thoughts and opinions, to an autograph book. Some I have only ever seen one copy of so I am assuming they are quite rare at this point.

I have read some great and informative posts on this blog, keep up the good work!

Hello just to say am an avid follower of Aunt Daisy. Am collecting her books. Have a FB page honouring her and am doing a lot of research and would love to go on a road trip to where she lived in NZ, etc. Interesting blog as am an avid book lover also. Wow!! Thanks so much for the blog...In Spring of this year September U3A a group of us are presenting a play, having a display, wearing clothing of Aunt Daisy's era and really again just honouring her and women pioneers in NZ. I know she came from UK. Kind regards Lyn

I have the "Aunt Daisy's Cookery book of 1,150 selected recipes No.5-Limited Edition" I guessed it was published during WWII given the reference in an ad for gas stoves on the back cover in which she states, "Time means Victory!" Thanks for listing the publication dates of her books. I now know this one was published in 1942. It is still used every year particularly for jams and pickles. A bit frail but still with cover attached and all pages firmly in place. Off to make some rhubarb and raspberry jam from it, as a birthday gift for a lady who is ten years older than the book;-)