“Kinetic art is the first new category of art since pre-history”.

With this bold statement, uttered in 1964, Len Lye (1901-1980) left little doubt that he would hold an integral place in New Zealand’s artistic landscape. Today, the filmmaker, kinetic sculptor, painter, photographer and writer is recognised as one of the most original artists to emerge from this country.

nd “big idea”—that movement could be the basis for a completely new kind of art—is explored in a new book by University of Auckland Emeritus Professor Roger Horrocks, (phto left, Marti Friedlander), opan experienced writer and filmmaker, and the founder of The University’s Department of Film, Television and Media Studies. 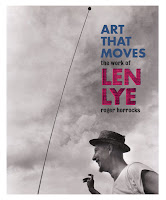 Art That Moves: The Work of Len Lye (Auckland University Press) illuminates what Lye called the “mystery of movement” in all forms of art-- from dance to film-- and in our own lives. Roger Horrocks traces these connections and reveals much that is new about Lye, including behind-the-scenes information about how the artist dreamed up and applied his new methods of filmmaking and created his kinetic sculptures. He also covers the remarkable story of how Lye’s unfinished projects are being built in New Zealand today and the controversy this has sometimes aroused.

Art That Moves will be launched alongside an exhibition of the same name at the University’s Gus Fisher Gallery. The show-- the first public gallery exhibition of Len Lye’s works in Auckland since 1980-- features a sculpture which will be on display for the first time. A wide-ranging, interdisciplinary programme of events will accompany the exhibition, comprising author talks, musical performances, and discussions with engineers, composers and filmmakers.

“Len Lye was one of the twentieth century’s most innovative artists and in Art That Moves his friend and biographer Roger Horrocks brings Lye’s sculptures and films to life again in a spectacular book and DVD. Auckland University Press is proud to publish this first full-scale assessment of the work of a great New Zealand artist,” says Sam Elworthy, Director of AUP.

"Lye has a world reputation as a filmmaker and was a pioneer of kinetic (motorised) sculpture, but many people are aware of only one of these sides of his work. Lye saw that films and sculptures are aspects of the same 'art of motion'. I wanted to show the links between them and I felt that the verve and originality of his ideas on the subject were still not fully understand. Hence the book and the exhibition -- to combine the sculpture and the films, and to uncover the theory behind the art," says Roger Horrocks, who worked as Len Lye’s assistant during the last year of the artist’s life and wrote the best-selling and critically acclaimed 2001 biography of Len Lye.

Appropriately for a book about movement, Art That Moves includes a DVD with four of Lye’s best films and some superb footage (directed by Shirley Horrocks) of his sculpture in action. It also contains a new eighteen-minute film directed by Roger Horrocks, a dramatic portrait of Lye in his early years.

The Art That Moves exhibition runs from 28 November – 6 February at the Gus Fisher Gallery (74 Shortland Street). A vibrant and eclectic public programmes calendar is detailed below. For more information visit www.gusfishergallery.auckland.ac.nz

Art That Moves: The Work of Len Lye
(Auckland University Press) - available from bookstores from 30 November. RRP $59.99.
Posted by Beattie's Book Blog at 11:41 am