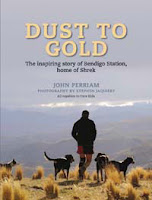 SHREK bravely nudges off All Blacks for top spot

SHREK will be getting an extra sprinkling of oats tonight to celebrate this week’s bestseller book news.

Dust to Gold: The inspiring story of Bendigo Station, home to Shrek, has now gone to number one on the New Zealand non-fiction bestseller list bravely nudging off both the Ali Williams and Richie McCaw books also just out.

Dust to Gold, which celebrates New Zealand’s pastoral heritage, immediately struck a chord with the heartland and went straight to the bestseller list in early November, after a week of being on sale. It’s been climbing the list each week since then. All royalties from sales of this book go to Cure Kids, SHREK’s charity of choice.

t, although SHREK was quietly confident that he would make it to the top, he’s not one to boast; and he’s taken it in his stride. He says SHREK was also quick to point out that the book is not just about him. In fact, he only takes centre stage for two chapters and the rest of the book is all about the richer and more fascinating Bendigo story which has been around much longer than him.

Random House publicist Jennifer Balle has just got back from a two week tour down south with John Perriam. SHREK joined them for the Alexandra/Invercargill leg of the trip and she’s delighted to report that at age 16 — 76 in human years — the big, woolly guy still has his mojo. She says it was quite something to behold seeing the way people responded to him.

“It’s incredible how faces, both young and old, light up when he strides, off-lead, into a room. As soon as the cameras come out, he leans towards them as if to say: ‘Right. It’s show time!’ and then once the gear’s packed away he stands at ease. And, when we’d pull up outside the venues, SHREK would look out from the jeep to assess the crowd before he ventured forth.

“I suspect all the toots from overtaking cars were for SHREK and not us.”

“Shrek’s a publicist’s dream. He’s better behaved than a lot of people and he was also the first one ready in the morning. Just a quick squirt of shampoo from John and rub of the face with a towel and that’s it. Unlike me who required a little more product before stepping out at 5.30am.”
Posted by Beattie's Book Blog at 2:19 pm