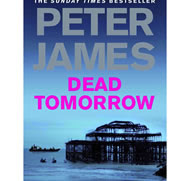 Pan Macmillan is spending a "six-figure sum" on the launch of "one of the biggest fiction campaigns" of the year with the publication of Peter James' new paperback.
The publisher will be launching what they believe is the "first series e-book app on the iPhone".

Rebecca Ikin, marketing director, said that the app will have a coverflow allowing users to browse and buy the other titles in the Roy Grace series. The app will also provide extra features, including research done by James with Brighton police force and a voice recording by protagonist, Roy Grace.

Geoff Duffield, sales and marketing director said: "It's by quite some way the biggest campaign Peter has ever had. We've had absolutely brilliant support from the retailers . . . It's one of the biggest fiction campaigns across the industry of the year."

Dead Tomorrow will be published as a £6.99 paperback on 4th December. The book will have have prominent placement in Asda, Tesco, Sainsbury's and W H Smith, and featured on the Amazon homepage.

Advertising will run on London buses, with posters across buses in the West End, the City and central London. James will also be touring around the
UK with talks and signings across Sussex, London, Bristol and Wales, with blanket review coverage and national and regional radio interviews.
According to Nielsen BookScan the hardback version sold 29,300 copies.
Posted by Beattie's Book Blog at 7:01 am