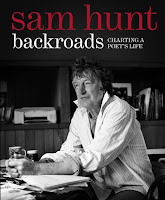 “The world of poems is very much a spoken one”

So says New Zealand’s best-known performance poet, Sam Hunt. Those of us who have had the great pleasure of hearing the lanky wordsmith recite his poems – on stage, radio, television or at a school – cannot forget that unmistakable voice larger-than-life persona.

In this first-to-be published memoir, the former altar boy, sometime
teacher and truck driver takes us down his backroads and introduces the
reader to the many characters he has had the pleasure to have known and
swapped words with.

In this beautifully produced volume, Sam writes of his inspiration, performing, touring, the creative process, drying up, publishing, small towns, Minstrel his beloved dog, and his poetic influences. Apart from the likes of W.B. Yeats, Pablo Neruda and Bob Dylan, Sam sings the praises and devotes space to the poetry of many of New Zealand’s finest poets.

Also included are personal insights into, and amusing anecdotes of, Alistair and Meg Campbell, Denis Glover, A.R.D. Fairburn, Robin Hyde and Hone Tuwhare. Sam makes it abundantly clear he has a particular soft spot for James K. Baxter and proudly reproduces the poems they answered each other with, plus the original copy of Baxter’s Letter to Sam Hunt, neatly typed in red ink. As well as other ephemera, Backroads is also illustrated with images taken from his personal photograph collection.

Sam ends with his musical outings, joining forces with Mammal, The Warratahs, David Kilgour and the thrill of opening for Leonard Cohen in his early 2009 New Zealand concerts. The Canadian veteran – who can take a full year to craft a song – praised Sam’s performance, saying: “That’s poetry.” What more can you say – that’s Sam Hunt.
I can see this one appearing in many a Christmas stocking on December 25!