Susan Hill writing on her blog in The Spectator
Thursday, 26th November 2009 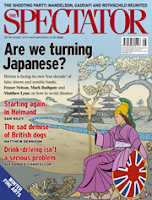 So Borders is the first. The bookshop chain went into administration today, after rumours flew and were denied and flew again. Given the present state not merely of the economy but of the book trade in general it would not be surprising if within 5 years there are no bookselling chains on the High Street at all. Waterstone’s may well be the next to go, after which I predict the not unhappy state of affairs in which the survivors will be the newly re-energised and lively good small independent bookshops, the supermarkets merely for the popular paperbacks at large discounts – and Amazon.

In my recent mini-author tour I went to four small indie shops, each of which, in very different ways, was a model of what they should be and will have to be, to survive. They did not bother to stock the latest celeb memoir or the glossy Christmas cookbooks because they could not discount them as do a W.H.Smith across the road, or the online giant. Every one of them had something better to offer – enticing selections of hand-picked books often from out of the way publishers, good backlist stocks, wonderful art, photography and travel sections. Their children’s book corners were all particularly well-stocked and arranged, enticing to both children and parents and often with fat bean bags, children’s art competitions – winners up on the walls- sample copies for reading, toy boxes for the toddlers.

Such shops sometimes have small coffee areas, stock other book-related items and greetings cards, audio books and even music CDs. But their main strength lies in their having knowledgeable, friendly, well-read, interested staff who are experts at guiding, say, grandparents or aunts who do not know what a 9 year old boy might like reading, have the titles of the last three novels by Alexander McCall Smith off by heart and are delighted to share their own reading enthusiasm and recommendations and run an in-store book club. These are the shops whose author events are attended by a loyal local audience. At each of my talks I answered a wide-range of questions from the informed and attentive people there, who afterwards bought a great many books. I don’t think anyone went away empty handed.

All of this is helping them to survive in a difficult market - because the one thing these small shops cannot afford to do is to join in the suicidal discounting war with the chains or the internet giant. Publishers have allowed themselves to be held to ransom over discounts, which can be up to 75%. It is well-nigh impossible to make a profit with such tight margins.

There are plenty of other things wrong with the trade. Far too many books are published – over 120,000 new titles in Britain in the last year and even excluding academic and text books, most these will sell comparatively few copies. At one time, libraries bought a lot of books, now they buy few. A sale of 2,000 copies in hardback used to be average for a first novel from a major publisher. Now, most sell fewer than 500 and non-fiction can be worse. Out of interest, I have been following the fortunes of a handsomely produced, well illustrated history title from a large and very good publisher. It is not written for scholars although it is by an expert and its subject is of more than minority interest. Published a month ago, it had sold 48 copies when I checked on the Book Database this afternoon.
Read the rest of Susan Hill's piece at The Spectator online.
Posted by Beattie's Book Blog at 7:43 am