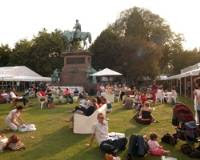 e upon a time, a book festival grew too big to fit inside its home

Published Date: 20 November 2009
By BRIAN FERGUSON in The Scotsman

It has been an oasis of calm amid the cultural frenzy of Edinburgh in August for 26 years.
The New Town pleasure garden in Charlotte Square has played host to many of the biggest names in literature at the capital's annual book festival.
But followers of the two-week celebration face having to leave their much-loved site under plans to expand the festival into new venues.
New director Nick Barley has revealed moves to ease pressure on Charlotte Square and boost attendances by staging events in suitable nearby locations.

City council officials are to help the festival seek out new venues after admitting it had "outgrown" the garden.
But Mr Barley denied reports that the festival will quit the square completely, insisting the move would be an expansion of the existing programme there.

Possible venues to host festival events include the Royal Society of Edinburgh's headquarters and the masonic halls on George Street, church halls on George Street and Shandwick Place, and the Filmhouse and Usher Hall, on Lothian Road.
Property tycoons David Murray and Walter Scott, who own many of the buildings on Charlotte Square, are not thought to have any suitable buildings.

Launched in 1983 as a biannual event, the book festival has been staged every year since 1998 and it now attracts more than 200,000 visitors. Most events sell out in advance and 80 per cent of all tickets have been sold for the last two years in a row.

Jim Inch, director of corporate services at the city council, said: "The event has grown and it is proving difficult to maintain in its current venue."
Mr Barley told The Scotsman: "It is true the festival has reached full capacity in Charlotte Square, but we have absolutely no plans to leave the garden.
"However we are very much open to new ideas such as using other venues. There may be certain events that are better suited to another venue for one reason or another. It's something we will definitely look at."

Bob McDevitt, publisher of Hachette Scotland, said: "It would be a good thing for bigger authors. The biggest venue at the site only holds 500 and for some authors you could attract far more. I suppose the danger is you might lose some of the atmosphere in Charlotte Square, where there is always a chance of bumping into a famous author if you're having a coffee."

Rod White, head of programming at the Filmhouse, said: "We've held screenings related to book festival events and we'd certainly be interested in seeing how we can work together."

Both the Royal Society of Edinburgh and Universal Arts, the promoters who run the masonic halls as a Fringe venue, said they would be keen to explore staging book festival events.

A city council spokeswoman said: "Senior officers are planning to meet the new book festival director to hear about his vision for the festival."
Posted by Beattie's Book Blog at 10:23 pm