Jaws are dropping all over Hollywood: “The Twilight Saga: New Moon,” an inexpensive sequel from a three-year-old independent studio, sold a supernatural $140.7 million in tickets over the weekend in North American theaters. 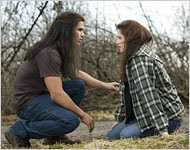 With strong advance sales, this Summit Entertainment movie, based on the second of Stephenie Meyer’s four teenage vampire books, was expected to be an immediate blockbuster. But box office prognosticators had the outcome closer to $100 million. The first movie, “Twilight,” sold $70 million in its first weekend.
The huge No. 1 opening gave “New Moon” a rarefied perch in the motion picture industry’s record books. It ranks as the third-biggest opening on record, behind the pop culture behemoths “The Dark Knight,” which sold $158.4 million last year, and “Spider-Man 3,” which sold $151.1 million in 2007. “Pirates of the Caribbean: Dead Man’s Chest” previously held the third spot with $135.6 million.

Female moviegoers, particularly teenage girls, drove ticket sales, as expected. Summit said the audience was only 20 percent male, an improvement from the first movie; 50 percent of the audience was under the age of 21.
Read the full article at NYT.
Posted by Beattie's Book Blog at 9:31 pm