Novelist Colum McCann, (pic left, photo by Brendan Bourke), won the 2009 National Book Award for Fiction for his novel Let the Great World Spin (Random House); Gore Vidal (awarded the medal for Distinguished Contribution to American Letters) was rambling, witty and profound as he recounted his life while seated in a wheelchair at the podium; and master of ceremonies, humorist Andy Borowitz, sent everyone home at 10:45 p.m. with a crack about Sarah Palin’s new memoir, Going Rogue, being an early candidate for the 2010 NBA fiction prize.

The National Book Awards returned for the second year to Cipriani Wall Street in downtown Manhattan, and the elegant soaring room is starting to feel right. The NBA ceremony always manages to touch on current events and last night was no different: tough times for publishing, the digital book revolution and the ongoing war were all mentioned in one speech or another. Borowitz set the tone at the beginning, noting that he had always said to himself that the National Book Awards were so prestigious, he’d host them for free; “turns out that’s just what they had in mind,” he said to laughter from the crowd. “But that’s what publishing is all about,” he added. “A lot of work and then—nothing.” 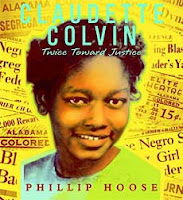 The winners: Phillip Hoose’s Claudette Colvin: Twice Toward Justice (FSG/Kroupa), the story of the almost forgotten black teenage girl who refused to give up her seat on a segregated bus in Montgomery, Alabama nine months before Rosa Parks did the same thing, won the award for Young People's Literature. Hoose called winning the award “unreal” and said that Colvin “took a chance on me. She had never heard of me and was about to be forgotten by history and we saved her story.”

Keith Waldrop won the Poetry award for his book, Transcendental Studies: A Trilogy (Univ. of California Press), who asked wryly, “How will I live this down?,” adding, “I hope this award gets more people to read poetry.”
T.J.

Stiles, author of The First Tycoon: The Epic Life of Cornelius Vanderbilt (Knopf), won the award for Nonfiction and called it an “out of body experience.” Stiles said that books “are at the heart of our culture,” and went on to thank the vast army of workers—“ a complete eco-system” —that make books possible. “The editorial assistants, the copyeditors, the designers, agents, publicists, the guys in the mailroom, librarians—I hope e-books aren’t fooling us into thinking these people aren’t needed.”

The Fiction winner, McCann, an Irishman—he dedicated the prize to the late Frank McCourt—said he came down to the awards ceremony “on the subway with my brother and my wife, two parts of my life together, Ireland and New York/America. Stories are democracy. I came here from Ireland and it seems American literature can embrace the other."

Dave Eggers was humble and heartfelt in accepting the Literarian Award for Outstanding Service to the American Literary Community and hailed the high school kids he teaches. “This is an exciting and democratic time in publishing,” he said and held up those same kids as a symbol of the enduring power of the written word.
The full piece at PW.
And for Motoko Rich on McCann's win go to NYT.