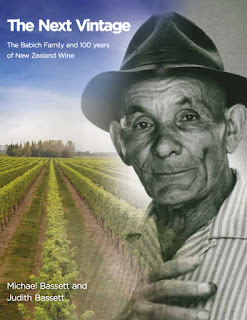 by Michael and Judith Bassett

In 1916 Josip Babich aged 20 made his first wine from his own grapes at Kaikino in the far north of New Zealand. Six years earlier, he and a brother had travelled all the way from Dalmatia to join three older brothers working on the gum fields. Like them, Josip soon anglicised his name and described himself as a “settler”. This book tells the story of the Babich family, their early struggles, and of their successful vineyards. Josip and his sons Peter and Joe, and now David, Peter’s son, have played leading roles in the development of the New Zealand wine industry from its early days to the significant export industry that it is today. Babich Wines Ltd produces wines that have won many of the accolades available to vintners in this country and abroad. It exports to more than 40 countries. The family and the company are now woven into the fabric of New Zealand history, from Dalmatia to the northern gum fields, to their iconic vineyards in Henderson, Hawke’s Bay and Marlborough.

This fascinating, handsome pubtcation is a sumptuous full colour tribute to one of our great winemaking families

About the authors:
Michael and Judith Bassett are both historians by training, having met as teachers at the University of Auckland. Subsequently Michael had a substantial political career as a West Auckland MP and senior cabinet minister and since retiring from Parliament he has published four biographies of Prime Ministers. Judith has enjoyed a lengthy role in local government, including chairing the former Auckland Hospital Board, the ASB Trusts, and Auckland Regional Holdings. This is the second book they have jointly authored. Both have known the Babich family for more than forty years.