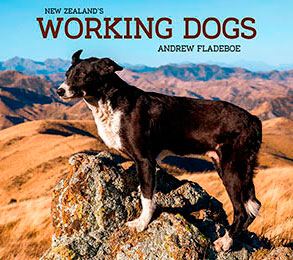 Andrew Fladeboe came to New Zealand on a Fulbright scholarship to immerse himself in rural life and document the traditional New Zealand working dog. He travelled to numerous South Island stations and worked alongside farmers and their dogs. But through his time in New Zealand, Andrew discovered that the importance of working dogs wasn’t confined to the hard-working huntaways and collies of the sheep stations.

New Zealand’s Working Dogs branches out to document other significant roles that these creatures play in our lives, such as those affiliated with the police, airport security and customs, the Department of Conservation, and search and rescue teams. Andrew also experienced the unique relationships that dogs have when paired with the blind and immobile to greatly increase their quality of life.

About the author:
Andrew is an American photographer, who has been working with animals and dogs in his fine art photography for over 10 years. He grew up in Japan, Russia and Austria before studying photography at the Rhode Island School of Design. His previous photo projects have taken him to the Netherlands, Scotland, Norway, and France. In 2014, Andrew received a grant from the Fulbright Foundation to come to New Zealand and focus his lens on the working dogs of New Zealand. His fine art work is represented by Peter Hay Halpert Fine Art in New York City and is found in a growing number of collections

Listen to ... an interview with Andrew on National Radio