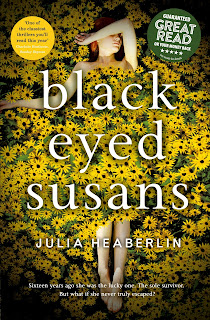 I am the star of screaming tabloid headlines and campfire ghost stories. I am one of the four Black-Eyed Susans. The lucky one.

Seventeen-year-old Tessa, dubbed a 'Black-Eyed Susan' by the media, became famous for being the only victim to survive the vicious attack of a serial killer. Her testimony helped to put a dangerous criminal behind bars - or so she thought.

Now, decades later, the case has been reopened and the black-eyed Susans planted outside Tessa's bedroom window seem to be a message from a killer who should be safely in prison.

Tessa agrees to help with the investigation, but she is haunted by fragmented memories of the night she was attacked and terrified for her own teenage daughter's safety. Can she unlock the truth about the killer before it's too late?

About the author:
Julia Heaberlin grew up in Decatur, Texas, a small town that sits under a big sky. It provided a dreamy girl with a great library, a character behind every door, and as many secrets as she'd find anyplace else.
An award-winning journalist, she has worked as an editor at the Fort Worth Star-Telegram, the Dallas Morning News and the Detroit News. Black-Eyed Susans is her third psychological thriller set in Texas.
She lives near Dallas/Fort Worth with her husband and has a son who attends the University of Texas at Austin.
She is currently at work on her next novel of suspense.
Posted by Beattie's Book Blog at 7:57 pm