Inside the Black Horse - A New Zealand crime story and a romance. 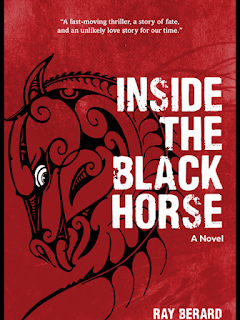 Pio Morgan is waiting outside a pub on a cold winter night. There is a debt he must pay and no options left. What he does next drags a group of strangers into a web of confusion that over the course of a few days changes all their lives. The young Maori widow just trying to raise her children, the corporate executive hiding his mistake, the gang of criminals that will do what ever it takes to recover what they've lost - and the outsider sent to town to try and figure out who did what. Time is running out for all of them as events take an increasingly dark turn.
“A crime story and a romance. Violence and compassion. Ray Berard’s Inside the Black Horse is both a compelling journey into the dark world of gangs, drugs and killing and an engaging look at the mending of broken souls. An armed robbery that unexpectedly interrupts a drug deal sets the scene, thrusting good and evil against each other in a race to recover the loot. The reader is sucked along and kept guessing until the final unraveling that is both surprising and simple.”
David Lomas
Award-winning crime/investigative journalist and investigator on the acclaimed TV series Missing Pieces and Lost&Found

Author Bio:
Ray Berard is a Canadian born Kiwi writer based in Christchurch New Zealand. A McGill University graduate and five-year member of the NZ authors association, writing has always been his passion, and in recent years a full time one. Inside the Black Horse is his debut novel, based off a diary he kept during his years supervising betting outlets for the New Zealand Racing Board.
"It's about New Zealand right now, and what happens when a group of strangers get drawn into each other’s lives after a young man's desperate act."
Ray is currently working on his second Novel, The Diary of a Dead Man.