Being Magdalene - Fleur Beale's gripping sequel to the award-winning YA novels I Am Not Esther and I am Rebecca. 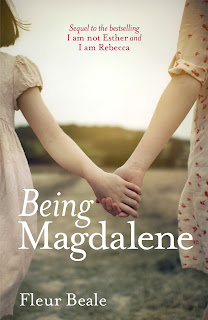 The gripping sequel to the award-winning and bestselling YA novels I Am Not Esther and I am Rebecca.

In this breathtaking follow-up to I am not Esther and I am Rebecca, Fleur Beale revisits the Pilgrim family and its closed religious community, The Children of the Faith.

Four years have passed since Rebecca ran away. The community simmers with tension and rumours of an approaching split, and life has become terrifying for Rebecca's remaining siblings as Elder Stephen seizes any chance to take revenge on them. Twelve-year-old Magdalene lives in fear that her strong-willed little sister, Zillah, will be his next target.

The girls have run out of people who can protect them. To Zillah their path is clear but Magdalene is torn. How can she cause more hurt and shame for her parents? But, equally, how can she face a life with no freedom to be herself?

And another question scares her most of all. Without the elders' suffocating rules that tell her how to live, who would Magdalene be?

Fleur Beale is the author of many award-winning books for children and young adults — she has now had more than 40 books published in New Zealand, as well as being published in the United States and England. Beale is the only writer to have twice won the Storylines Gaelyn Gordon Award for a Much-Loved Book:with Slide the Corner in 2007, and I Am Not Esther in 2009.
She won the Esther Glen Award for distinguished contribution to children's literature for Juno Of Taris in the 2009 LIANZA Children's Book Awards. Fierce September won the YA category in the 2011 NZ Post Children's Book Awards and the LIANZA Young Adult Award in 2011.
In 2012 she won the Margaret Mahy Medal for her outstanding contribution to children's writing and in 2015 she was made an Officer of the New Zealand Order of Merit. In 1999, Beale was Dunedin College of Education's Writer in Residence. A former high-school teacher, Beale lives in Wellington.
Posted by Beattie's Book Blog at 3:56 pm