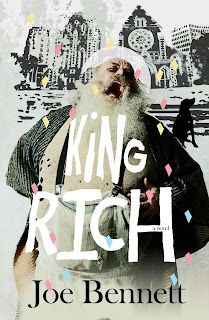 Not long after the Christchurch earthquakes, Joe Bennett caught up with a friend at the pub. The friend told him a story that proved to be the germ of a novel, Joe’s first – King Rich.

In the heart of the central city red zone stood a condemned luxury hotel. According to the friend, someone was living there. Thermal imaging had detected him. Who was that person? Why was he there?  What was his story?

King Rich is Joe’s answer.  It is the haunting story of intertwined lives, set amid the devastation of post-earthquake Christchurch. Richard hides with a dog in the abandoned hotel.  Annie returns from England as news of the disaster brings childhood memories flooding back.  Vince relives the love of his life.
About the author:
Joe Bennett is well-established award-winning non-fiction writer and columnist.  His work is published across many newspapers and magazines in New Zealand.  Collections of his columns were an annual publishing event for over 10 years.  Joe’s travel books, Where Underpants Came From, Mustn’t Grumble and Land of Two Halves ensured Joe was never far off the bestsellers lists.
This is his first novel and I rate it as a very fine piece of fiction. I hope more follows.

Joe’s last work of non-fiction, Double Happiness was published in 2012.  It laid bare the techniques behind bullshit and how it has become so ingrained in our everyday lives that we barely recognise it.

Joe still lives in Lyttelton despite the best efforts of the Christchurch City Council.