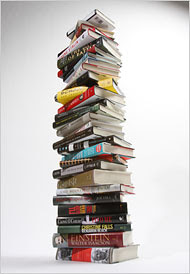 A Year of Books Worth Curling Up With
THE NEW YORK TIMES
Published: December 28, 2007
Full-time book critics approach recreational reading with a head start. We’re already reading for pleasure. We are immersed in books we find appealing, since the nearly 300 books chosen for the daily reviews in The New York Times have been culled from tens of thousands of volumes published each year. Some are chosen for their self-evident importance. Some are terrific sleepers. Even if a book’s foremost quality is its awfulness, a review in these pages means there’s something about it that one of us found noteworthy.
But we have favorites. And they meet criteria that any reader will recognize. These are the books that are disappointing only because they have to end. They’re the ones we mention to friends. They’re the ones worth taking on vacation, and they are well executed, whatever their genre or subject matter. They are what we’d read even if Michiko Kakutani, William Grimes and I weren’t designated readers.
The 10-favorite lists that follow are not 10-best lists. They’re not based strictly on merit. They don’t cite books we admired in the abstract but didn’t particularly like. Nor are they based on comprehensiveness; with so many books afoot, none of us can hope to have a complete overview. Each of us has stayed within the confines of our own reviews published in 2007 and picked the 10 books we covered most avidly — though there is one exception. Because Times critics do not review the work of their Times colleagues, Michiko Kakutani did not review Tim Weiner’s “Legacy of Ashes.” She recommends it nonetheless.
Think of these as lists that leave off the broccoli, figuratively speaking — though we have nothing against broccoli at all. (Michael Pollan’s new pro-vegetable manifesto, “In Defense of Food,” might be on my list were it not for a technicality: Its publication date is Jan. 1, 2008.)
Our tastes and interests are sufficiently different for there to be only one point on which we readily agree: As it becomes possible to rush books into print ever more hastily, editing ain’t what it used to be. “Finding Faith Without Fanatacism” is a misspelled subtitle that actually found its way onto the front cover of a hardbound 2007 book (“You Don’t Have to Be Wrong for Me to Be Right,” by Brad Hirschfield, published by Harmony Books; it has since been corrected). Though there are many candidates for the honor of Year’s Sloppiest Book, the wall-to-wall bloopers in “Pearl Harbor,” a novel by Newt Gingrich and William R. Forschten, warrant special “wretching noises” from us all. The books that follow, in alphabetical order by author, were, in the “Pearl Harbor” vernacular, “all ladened with” better things. —JANET MASLIN
HOUSE OF MEETINGS by Martin Amis. This harrowing, deeply affecting novel recounts the story of two brothers interned at one of Stalin’s slave labor camps, taking the reader on a frightening journey deep into the heart of darkness that was the Soviet gulag.
THE SECOND CIVIL WAR: HOW EXTREME PARTISANSHIP HAS PARALYZED WASHINGTON AND POLARIZED AMERICA by Ronald Brownstein. A veteran political reporter provides a shrewd election-year assessment of the growing partisanship in American politics, looking at the roots of this polarization and its alarming consequences for the country at large.
THE YIDDISH POLICEMEN’S UNION by Michael Chabon. A clever, engaging and fully imagined epic cum detective story based on this historical what if: What if a temporary safe haven for Jews had been created in Alaska in the wake of the Holocaust?
NIXON AND KISSINGER: PARTNERS IN POWER by Robert Dallek. A fascinating portrait of President Richard M. Nixon and his chief foreign policy honcho, Henry A. Kissinger, a book that not only deftly deconstructs their emotionally fraught relationship and their policy making on Vietnam, the Middle East and China, but also underscores the historical lessons of their decisions and missteps.
THE BRIEF WONDROUS LIFE OF OSCAR WAO by Junot Díaz. A dazzling debut novel that unfolds from a comic portrait of a second-generation Dominican geek into an unnerving meditation on Dominican history and the relationship between political and personal dreams and losses.
THE UNKNOWN TERRORIST by Richard Flanagan. This Tasmanian novelist has written a dark, unsparing thriller about a case of mistaken identity, using his Hitchcockian heroine’s plight as a launching pad for an examination of a post-9/11 world in which fear is a valued commodity for terrorists and governments alike.
WHEN A CROCODILE EATS THE SUN: A MEMOIR OF AFRICA by Peter Godwin. A haunting and deeply evocative memoir about a writer’s discoveries about his father’s hidden past and his family’s life in Zimbabwe, a country that has seen its bright post-revolution dreams of a multiracial society give way to violent hatred and strife.
SCHULZ AND PEANUTS by David Michaelis. A revealing and sympathetic new biography of the creator of “Peanuts,” which highlights the autobiographical sources of the cartoonist’s art: how Charles M. Schulz gave his own wishy-washiness and determination to Charlie Brown, his sarcasm and anger to Lucy, his dignity and “weird little thoughts” to Linus and his frustrations and daydreams to Snoopy.
THE NINE: INSIDE THE SECRET WORLD OF THE SUPREME COURT by Jeffrey Toobin. A vivid narrative of the Supreme Court’s recent history and an intimate portrait of the individual justices that shows how personality, judicial philosophy and personal alliances can inform decisions that affect the entire country.
For more use this link.
Posted by Beattie's Book Blog at 1:21 am