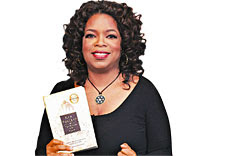 TO READ OR NOT TO READ
AMERICANS aren't just reading fewer books but less of every medium. That's the doleful conclusion of To Read or Not to Read, a report released by the National Endowment for the Arts.
If Oprah Winfrey can get Leo Tolstoy's Anna Karenina on the bestseller list, anything is possible, says Dana Gioia
Subtitled A Question of National Consequence, the report piles on the bad news delivered by Reading at Risk, the NEA's 2004 warning about the nation's rapidly declining literacy.
"The story the data tell is simple, consistent and alarming," writes Dana Gioia, the NEA's chairman, in the new report's preface. Primary school children have posted some gains in literacy but "there is a general decline in reading among teenage and adult Americans. Most alarming, both reading ability and the habit of regular reading have greatly declined among college graduates."
Unlike the 2004 study, To Read or Not to Read examined not just literary reading but all kinds of reading, including online. And it tapped a far wider range of sources, notably statistics from the Department of Education and the Department of Labor, as well as academic and corporate studies.
None of it adds up to good news for the written word. Just how reading-averse have Americans become? In 2006, the study found, 15 to 24-year-olds spent just seven minutes on voluntary reading on week days, and 10 minutes on Saturdays and Sundays. But they found time to watch two to 2 1/2 hours of television daily.
Older and presumably wiser -- or at least more bookish -- generations didn't do much better. In 2006, people between the ages of 35 and 44 devoted only 12 minutes a day to reading. Even the best-read group, Americans 65 and older, logged less than an hour each weekday and little more than an hour on weekends.
"This study shows that reading is endangered at the moment in the US, especially among younger Americans," Gioia says at a news conference to announce the report.
When Americans do manage to read something, whether it's a book or a blog, more and more of them can't do it well. The proportion of 12th graders reading at or above the proficient level fell significantly between 1992 and 2005, from 40 per cent -- hardly a robust number to begin with -- to 35 per cent. Meanwhile, during roughly the same period, the share of college graduates who could reliably find their way through a piece of prose declined by 23 per cent.
If you think a masters or doctorate would render you immune to the national decline, think again: even Americans who have studied at the graduate level saw their reading skills atrophy: 51 per cent were rated proficient readers in 1992 but only 41 per cent made that grade in 2003.
Read the full story here.
Posted by Beattie's Book Blog at 7:15 am