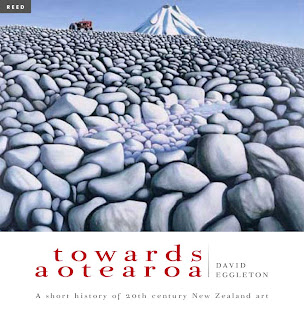 Last night Bookman Beattie was greatly privileged to attend the launch of the final book in Reed Publishing's Raupo series, an impressive collection of books all published this year to mark 100 years of Reed publishing in New Zealand.

Along with Reed Publishing Manager Peter Dowling, Gillian Tewsley, Commissioning Editor at Reeds,Rececca Gannaway, Reed's lively Publicity & PR Manager, and longtime Penguin Publisher Geoff Walker, there were also quite a number of artists present who are featured in the book. Among those I recognised were Don Binney, Jacqueline Fahey and Ian Scott. I also noticed another prominent writer in the arts field, Christopher Johnstone.

Gillian Tewsley, who worked with David Eggleton to produce Towards Aotearoa, addressed the almost 100 strong audience and here is part of what she had to say:

"Welcome to this launch of David Eggleton's, Towards Aotearoa: A Short History of 20th New Zealand Art.

This book is the last in our special RAUPO SERIES of titles that we have published throughout 2007 to celebrate 100 years of Reed Publishing – and as it turns out, sadly, it is the last book to be launched by Reed, that iconic Kiwi institution. Reed is now known as Raupo Publishing, and in the new year will be reincarnated as an imprint of Penguin New Zealand. So – a very special book.

Our brief to David was to write and compile a work that celebrates 100 years of New Zealand art. And this is what if does, most fulsomely. David has chosen seminal works, many of them (like Michael Smither’s Mountain with Rocks and Tractor on the cover) instantly recognisable to most people. This is because they are all works that have made a difference. David uses these 100 works to track the course, not just of NZ art, but of us as a people. This is not just ART history – its OUR history (and these are our people!), told in an accessible and user-friendly way. Any Kiwi reading this book will recognise themselves in it – like the School Journals, these works are embedded in our past, our present – and our future.

And at the same time as giving his intelligent discourse on our history, David takes the reader on a gallery tour, talking about each work – how the artist created it, why they made it, what materials and techniques they used, the effect of these choices ... This is How to Look at Our Art, told by David in articulate and passionate prose, in the context of our New Zealand story. So, gazing at this book, reading it, is at once a revealing history lesson and a personal guided tour.

Before I hand over to David to tell you more about the writing of the book, I would like, on behalf of Reed/Raupo, to thank all the contributing artists for their generous support of the project, and for their encouragement – it wouldn’t have happened without you! I’d also like to thank the many galleries and museums and private collectors who helped with sourcing the images and permissions; the photographers – especially Krzys Pfeiffer and Norm Heke – who went out and rounded up the missing ones; Diane Lowther who broke the back of the permissions-gathering in her very organised way; Graeme Leather, who is responsible for the very elegant, light and airy design of the inside pages; and Cheryl Rowe, who gives a cryptic salute to her mountain on the cover."

To which David responded:

When Gillian approached me in July 2005 to write about New Zealand’s greatest art works of the twentieth century, I felt both honoured and daunted by the scale of the task; it seemed epic, and indeed for the next two and a half years as I’ve pondered on and looked at the extent of truly interesting art — art that’s interesting for all kinds of reasons — which is actually emerging from this small group of islands, I’ve been almost literally staggering, in ungainly fashion, under the weight of the task. What I’ve come up with, to use metaphors of place and time, is a book that traces the oceanic currents leading towards a land whose peaks rise through the clouds and become landmarks to what lies beneath.

This book is intended as a way in for the general reader to this part of the South Pacific and to the artists who live and have lived here, and who help energise the visual culture. I was at the Auckland City Art Gallery earlier on today, dawdling on my way to this launch, and I came across Len Lye’s 1963 “Universe”, which has this big metal strip pulsing in a loop and trying to reach up to strike this ball shape that’s hanging there, and I was transfixed by it; it dazzled me there and then, like a personal discovery, and it occurred to me that here was yet another great New Zealand art work but that it was also a great art work in world terms – we don’t need to obsess about the cultural cringe because we have produced some terrific works.

So my book in a way is just the tip of the iceberg, a selection serving to unfold a history that’s about the on-going trade in ideas and the expression of all sorts of feelings. This is not just a story about the pinnacles of expression, but also about the profound depths, the traumas — the Gallipoli campaign, World War Two, nuclear testing in the Pacific, the differences of biculturalism and multiculturalism— as well as acts of heroism —Sir Edmund Hillary — and so on.

We need to talk about art; write about it as well as we can. I’m a follower of the nineteenth century art critic John Ruskin, who believed sincerely that great art was everyone — that everyone could be introduced to it and engaged by it on some level, and that’s what helps make great art, great New Zealand art: you can argue and wrangle about it — from the self-conscious nationalists of the Thirties, to the utopian idealists of the Sixties, to the me-Decade expressionists of the Seventies, to the ironic and comic artists of the Nineties, not forgetting the artists who resist the big narratives — feminist artists, Polynesian artists, Maori artists, the iconoclasts who are always with us, whoever. Arrivals and departures, more arrivals, more departures, arrivals, the story goes on. Thank you.

We then all set about celebrating the launch of the most handsome Towards Aotearoa, (isn't that a stunning cover too?). A memorable and historic occasion.

Thank you Reed Publishing for a grand final hurrah.

FOOTNOTE:A fuller report on this title was posted on the blog last week so scroll back if you missed it.