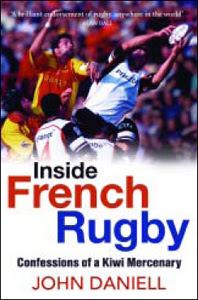 John Daniell's book brings tears to the eyes
From The Telegraph, London.
An interesting visitor from overseas at the University Match tomorrow will be New Zealander John Daniell, three times an Oxford Blue, who then became, in his own words, "a rugby mercenary" in France.
Having just retired from the game, his degree in English literature has come in pretty handy in writing the best rugby book of the year, Inside French Rugby.
"I'm not a Catty or a Dallaglio with reputations to defend or sponsorship deals to preserve. I have been able to tell it for real."
So he has. If you want to know how violent the French game really is - well, here it is, eye-gouging and all. More than anything though, it is as good an insight as you could hope to read into the everyday life of the professional sportsman - a life which Daniell says, "makes you a nervous wreck because it can be so boring. You have so much time to worry about how your career is going, will your contract be renegotiated, will the team get relegated? From January onwards every season, the weights room is just a gossip factory. Who's coming? Who's going? Will the new coach like me? You spend your whole time freaking."
Joe Roff and one or two others who are playing tomorrow and who have played professionally, will doubtless be able to empathise with many of the sentiments. The remainder of the 44 players at Twickenham should all read the book, and then take a job offer in the city. It is undoubtedly a far less stressful life.
Footnote:
Published by NZ's own Awa Press in August this year. Great to see it earning accolades internationally.
Posted by Beattie's Book Blog at 5:05 pm