This Festival is different to any of the others I attend. It is held in a smaller, almost intimate venue located at Titirangi in the hills high above Auckland's west; it features New Zealand writers only; the sessions are short and sharp - 45 minutes with no breaks between sessions apart from morning and afternoon teas and lunch; there is only one session at a time; lunch is provided as part of a day or weekend pass, as is morning and afternoon tea; a jazz pianist provided lunchtime entertainment; the whole thing is run by founder Murray Gray, his wife Naomi McCleary, Festival Project Manager Anna Fomison and a handful of volunteers. They are an impressive team providing a unique Festival and I salute them.

Saturday got underway with author/creative writing tutor Emily Perkins presenting eight students from her Master of Creative Writing course at the University of Auckland who all read excerpts from their novels or short fiction or poetry and spoke of what the year has meant to them. I found it quite inspiring and as Festival Programme Director Murray Gray said in his thanks "these are the people who will be the writers speaking at this Festival in years to come".

By the way we know that the Festival's future assured as Auckland Mayor Len Brown was present and in a brief but warm message said that the City was delighted to be a major supporter of the Festival and looked forward to a warm, ongoing association with it. Bravo Len. 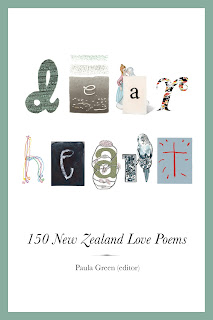 Next up was high profile NZ poet Paula Green who in her 15 minute session read six love poems from her 2012 collection Dear Heart:150 New Zealand Love Poems, followed by three poems of her own from her collection to be published next year, The Baker's Thumbprint.
Paula is a regular, and popular performer at Going West. 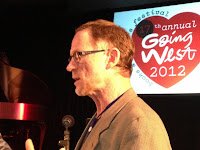 Another 15 minute poetry interlude was one of the features of the afternoon programme when Dunedin-based poet David Howard (right) read from his work.
David's collaboration with Peter Ransome revisits punk Christchurch: You're So Pretty When You're Unfaithful To Me - Holloway Press - launched at the Festival.

Your Unselfish Kindness
This is the title of a new book which features the previously unpublished autobiographical writings of journalist/poet/novelist the late Robin Hyde and it was also the title of the next session which featured the editor of that collection, academic Mary Edmond-Paul and veteran journalist/commentator/writer Gordon McLauchlan in conversation about the remarkable writing of one of our iconic literary figures.Of particular interest was their discussion about the similarities and differences between Robin Hyde and Janet Frame.
I was fascinated by this entire conversation and hugely impressed by the encyclopaedic knowledge about Robin Hyde displayed by McLauchlan and Edmond-Paul. I was disappointed when the session came to an end and wonder if the Festival may at some stage perhaps organise a one day symposium on the subject of this enigmatic woman who died in 1939 aged just 33. More please. 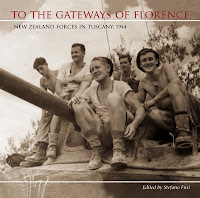 Author Marsh was questioned by Turner about his wartime novel Greyhound which took him nearly seven years to write wuth the considerable research he carried out which included talking to many elderly servicemen about their wartime experiences in Italy as well as travel to France, Italy and Slovenia.
Then Turner talked to Dowling about his recently published book,To the Gateways of Florence.
Translated from a 2009 Italian book, To the Gateways of Florence enables New Zealanders to read Italian historians analysing New Zealand’s pivotal role in Tuscany, alongside contributions from three of our own leading military historians – Christopher Pugsley, Monty Soutar and Jeffrey Plowman.

The last session before lunch had journalist/critic/columnist David Larsen talking to author Tim Wilson, TVNZ's former US correspondent author of Their Faces Were Shining (novel) and the more recent short story collection The Desolation Angel both published by Victoria University Press. In the course of 45 minutes Larsen had Wilson talking across a wide range of subjects including his writing practices,his first visit to the US, his 10 years living in the US (he arrived in NYC three weeks after 9/11), exceptionalism, growing up in a religious household - his father was a Presbyterian minister, minor celebrity status as a TV journo,  the early 1960's SciFi writing of J.G.Ballard and others, middle age, the future of print media, the property gospel as well as his two books and other matters too. Amazing what can be fitted in to a 45 minute session.

This session was a conversation between flamboyant personality and artist Jacqueline Fahy whose second volume of autobiography, Before I Forget, has just been published by AUP, and author/art critic/cultural curmudgeon Hamish Keith an it proved to be one of the funniest and most entertaining sessions I have ever attended at a literary Festival. These two are clearly old friends, neither had notes and they chatted away, with Fahy frequently interrupting Keith or challenging, often in highly colourful language, his interpretation of something she had said or written. With some skilful prodding by her companion on stage she talked about being married to  doctor, of her New York visits back in the 60's and what a cultural shock it had been, of life in the 60's and 70's, censorship, her relationship with Rita Angus and much more besides and then concluded with reading us a passage from her book set in 1966 featuring a social event and NZ's "pre-eminent literary and cultural scholar" Eric McCormick.
They exited the stage to loud applause. And below Jacky signs books.

Shape Shifters
Then it was The Bookman's turn and I had the honour and pleasure of talking to author Nalini Singh (left-photo by Deborah Hillman) whom the programme described as "one of New Zealand's best-known secrets".

Certainly for a long time she has been a well-kept secret as a NZ writer. Surprising really because she has some 22 books published and several have been on both the New York Times and USA Today best-sellers lists. She has even been on the hardback best-seller lists. And on Friday her latest book Archangel’s Storm reached # 8 on the NYT paperback list, and #18 on the eBook list. Her books have sold well in excess of three million copies.

Today though we are much more likely to have heard of her as she has had a flurry of media coverage this year but prior to that most would have said – “Nalini who?”

Nalini was born in Fiji and emigrated to NZ with her family when she was 10 years old.
We began talking about what influenced her in those early years in NZ, about studying
law at university and then working as a lawyer for two years. But all this time she was writing fiction, initially romantic fiction, "the Mills & Boon type",and she had six novels published in this genre in NY by Silhouette Books.
But then while on her OE, and teaching English in Japan, she wrote her first paranormal romance title which she sent off to a NY agent,(acquired after research and subsequent contact), and the rest as they say is history.
She has been a full-time writer ever since (her goal since she was 15 years of age) and in addition to an occasional stand-alone novel she has two series of books the Psy-Changeling series (seven titles to date starting with Slave to Sensation)  and the Guild Hunter series (five titles to date starting with Angels' Blood).
She is a strong advocate for the need for all authors to have their own website and to use social media as a way of communicating with readers.
The US is her biggest market  with huge sales being achieved there but she is also published in Germany which is her second-biggest market and just recently she has been on an author tour of Europe.Her books have been translated in to 22 languages.She likes travelling and uses her tablet to continue writing while on tour or holiday. Next week she is making a tour of the Waikato-King Country areas .
Her market is primarily female from young adults up although she estimates about 10% of her readers are male. She is a most impressive, clever,focussed and hard-working young woman about whom we will hear much more in the future.
And I was interested to observe she was mobbed by fans as she left the stage all wanting their copies of her books signed.

Meanwhile I had to rush back to the city to attend a grand-daughter's birthday party so missed all the music action that followed David Howard's poetry reading and Mirranda Burton and Dylan Horrocks talking about graphic novels and comics.

A grand day, my warm thanks to Murray, Naomi,Anna and their team.
Posted by Beattie's Book Blog at 11:59 am