The usually press-shy J.K. Rowling submitted to a New Yorker profile on the eve of the publication of her first novel for adults. Or should we say adult novel? According to the article, there are at least a few salty phrases in The Casual Vacancy. Such phrases as "that miraculously unguarded vagina," "the leathery skin of her upper cleavage radiated little cracks that no longer vanished when decompressed," and " ... with an ache in his heart and in his balls." 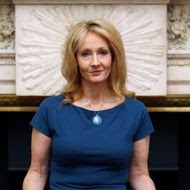 Okay, fine, those are pretty tame. But don't expect a follow-up book for grownups with wizarding-world sexytimes. "The thing about fantasy — there are certain things you just don't do in fantasy," Rowling says. "You don't have sex near unicorns. It's an ironclad rule. It's tacky." Unless that unicorn is painted on the side of a van, she neglected to add.
Unrelated to unicorns or ball aches, the article also reveals another unpublished tidbit of Harry Potter ephemera: "I asked her if Dudley, Harry’s cousin, had any children as an adult," Ian Parker writes. "And she told me that he had two."