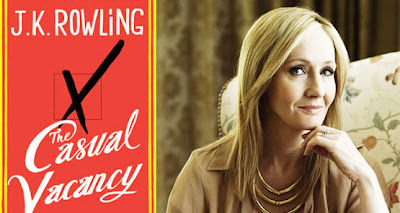 JK Rowling: "The idea just came to me, I had that almost visceral reaction when you know you want to do something"

The Casual Vacancy, the first adult book from Harry Potter author JK Rowling, has been variously described as "unadventurous", "bleak" and "brilliant" in reviews by leading newspaper critics.
Set in a small-town community in the West Country, it centres on an unexpected vacancy on the parish council that arises following the sudden death of a 'good Samaritan'.
The consequent election sharply divides the apparently cosy community and reveals the snobbery, malice, darkness and desperation at the heart of the village.
Rowling, who has been criticised by some for the novel's gritty language and themes, will read from the book at a public event at London's Southbank Centre on Thursday.
The reading will be streamed live on YouTube from 19:30 BST.
Here is a selection of review excerpts taken from Thursday's newspapers.

The Casual Vacancy is a solid, traditional and determinedly unadventurous English novel... a study of provincial life. The book seems doomed to be known as Mugglemarch.
The book has a righteous social message, about responsibility for others, and a great big plot that runs like clockwork.
On the other hand, the novel is very much a prisoner of its conventions. The plot is often predictable; it requires a large helping of artificial contrivance; and it lurches into melodrama in the final act.
It all rattles along nicely enough, but it leaves a slight sense of disappointment.
Read full review

The Casual Vacancy, JK Rowling's first adult novel, is sometimes funny, often startlingly well observed, and full of cruelty and despair.
It feels as if the author has unleashed all the swearing, sex and vitriol that have been off-limits to her since Harry Potter and the Philosopher's Stone was published in 1997.
The book is at it weakest when it is most angrily political.
The novel pretty much explodes towards the end, losing shape in its fury at the dirty, unfair England that we Muggles have made for ourselves. It's like The Archers on amyl nitrate.
Read full review

Rowling draws on her newfound liberty to touch on themes of heroin addiction, prostitution, drug dealing, online porn, self-harm with razor blades, child abuse and the rape of a teenage girl.
Rowling's writing, which can be long-winded and laborious in the clunkily satirical set-pieces, picks up passion and even magic with Krystal and the other adolescents.
Indeed, the teens of Winterdown belong in a bolder, richer book than some of the parental caricatures.
Slowed down by its fussy class geography and wheezing plot-motor, the novel builds into a vividly melodramatic climax with these kids at its heart.
Read full review

JK Rowling, who, like Dickens, rose to fame and wealth from poverty... has, in The Casual Vacancy, taken it upon herself to revive the idea of the novel as a force for social good.
The difficulty, in this fat novel, is the difference between the reader's level of interest in a wholly invented world, such as Harry Potter's, and the world we're stuck with.
Rowling has a sharp eye for vivid details, and there are passages of very good writing in this book... But her fictions have little shadow in them.

JK Rowling's first novel for adults is foul-mouthed, brutal and extremely bleak... a billion miles away from the charm, magic and innocence of Potterland.
This is adult stuff that requires a very broad mind as well as patience. But there's heart here and humour too.
Perhaps the biggest surprise after months of secrecy and false leads is that the world's best-known, best-loved and best-selling author is the real deal, more than equipped to tackle the grown-up world.
The Casual Vacancy is a stunning, brilliant, outrageously gripping and entertaining evocation of British society today.
Read full review

Can The Casual Vacancy ever live up to the hype? On balance, I would have to say no. Not unless you want to have more than 500 pages of relentless socialist manifesto, masquerading as literature, crammed down your throat.
From start to finish, JK Rowling's main area of conflict is between the selfish middle-class villagers and the noble savages on the poverty-stricken estate.
JK Rowling likes to describe her new book as a comic tragedy, yet there are few laughs to pierce the blanket of gloom in this bleak, rather one-sided vision of life in modern England.
Read full review

The Casual Vacancy features scenes that would make Harry Potter blush and it definitely isn't for children.
The book isn't flawless. Her writing style is direct and uncomplicated rather than literary and she has an annoying habit of shoving slabs of explanatory detail into brackets.
Some readers will be shocked at Rowling's departure from wizardry and magic, but The Casual Vacancy is a highly readable morality tale for our times.
Read full review

There is no magic in this book in terms of wizarding or in terms of narrative sorcery. Instead, this novel for adults is filled with a variety of people like Harry's aunt and uncle, Petunia and Vernon Dursley: self-absorbed, small-minded, snobbish and judgmental folks, whose stories neither engage nor transport us.
The real-life world she has limned in these pages is so willfully banal, so depressingly cliched that The Casual Vacancy is not only disappointing - it's dull.
Characters are drawn in brisk, broad strokes, and with little of the complex ambiguity that fueled the later Harry Potter instalments. In fact, there is a vacancy deep in the heart of this novel.
Read full review
Posted by Beattie's Book Blog at 12:58 am