The Rowling Rollout - the big story of the week 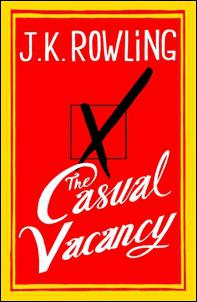 Two weekend profiles of JK Rowling prepared the ground for Thursday's release of THE CASUAL VACANCY, offering details on the book as well as the process that has guarded both the author and the book's contents.

Rowling told the Guardian, which ran their piece on Saturday, she dreamed up the idea for THE CASUAL VACANCY on a plane: "And I thought: local election! And I just knew. I had that totally physical response you get to an idea that you know will work. It's a rush of adrenaline, it's chemical. I had it with Harry Potter and I had it with this. So that's how I know."

As to whether Rowling feels "exposed" by the forthcoming publication, she told the New Yorker, whose more than 10,000-word feature and extensive interview was posted online Sunday, that she thought she'd "feel frightened at this point,” she said. “Not just because it’s been five years, and anything I wrote after Potter—anything—was going to receive a certain degree of attention that is not entirely welcome, if I'm honest. It's not the place I'm happiest or most comfortable, shall we say." She added: "'You're very lucky. You can pay your bills, you don't have to publish it.' And that was a very freeing thought, even though I knew bloody well, in my heart of hearts, that I was going to publish it. I knew that a writer generally writes to be read, unless you're Salinger." She was hoping for a "more run-of-the-mill publishing experience" this time around, but the New Yorker says "that hope only goes so far." (The only other print interview Rowling has granted was for a forthcoming USA TODAY feature.)
Both stories offered more details about THE CASUAL VACANCY, set in a fictional town of Pagford with the fate of a squalid council estate, The Fields, that's up in the air and subject to nasty arguments and doings after the death of a parish councillor. Written in multiple perspectives, the book is "a story of class warfare set amid semi-rural poverty, heroin addiction, and teen-age perplexity and sexuality." And while it's being billed as a black comedy, Rowling sees THE CASUAL VACANCY more as "a comic tragedy."

To the New Yorker, Rowling finds a common through-line between the new book and the Potter series ("mortality, morality, the two things I obsess about") while explaining to the Guardian how much CASUAL VACANCY deals with class: "We're a phenomenally snobby society," Rowling nods, "and it's such a rich seam. The middle class is so funny, it's the class I know best, and it's the class where you find the most pretension, so that's what makes the middle classes so funny."

In writer Ian Parker's assessment, "within a few pages, it was clear that the novel had not been written for children.... But reviewers looking for echoes of the Harry Potter series will find them. THE CASUAL VACANCY describes young people coming of age in a place divided by warring factions, and the deceased council member, Barry Fairbrother—who dies in the first chapter but remains the story’s moral center—had the same virtues, in his world, that Harry had in his: tolerance, constancy, a willingness to act."

Rowling said she met with Little Brown UK publisher David Shelley "without him knowing there was a book. So we just had a conversation, and I could tell he was really on my wavelength. So then I sort of vaguely mentioned what I might have, without saying it's virtually finished. There was no auction. It was just a great way to find an editor." Of the traditional alternative, she says: "The moment I said I'd finished a book, I knew what would happen. There would be a bidding war, and I would end up with someone who'd got the fattest wallet, who had bought it because I'd written Harry Potter. That would have been why."

As is now customary with a new Rowling book, the terms of the embargo are part of the story. The Guardian reporter described being "required to sign more legal documents than would typically be involved in buying a house before I am allowed to read THE CASUAL VACANCY, under tight security in the London offices of Little Brown. Even the publishers have been forbidden to read it, and they relinquish the manuscript gingerly, reverently, as though handling a priceless Ming vase."
The New Yorker's Parker describes a 2003 situation in which Rowling's agent Neil Blair's handling of quote approval on an interview had Bloomsbury publicity chief Minna Fry with "her head in her hands," but says the magazine resisted a request to give Rowling quote approval for their story. Parker did sign some form of non-disclosure agreement in order to read the manuscript, and was initially "prohibited...from taking notes."
The Independent whines about being asked not to acknowledge the non-disclosure agreement they would have had to sign in order to get a review copy ahead of time.

More stories about Rowling,(including the full whine from The Independent, & her new title appear below.
Posted by Beattie's Book Blog at 7:40 am

You know, most readers dont really care?
I stopped reading Rowling at book4 (I never actually finished it) and the very idea of her attempting ?crime
?reality fiction appeals like a cup of cold sick.