Food is the new sex, drugs and religion. Cookery dominates the bestseller lists and TV schedules. Celebrity chefs have become lifestyle gurus and cooking is referred to as a high art. Steven Poole has had his fill of foodism 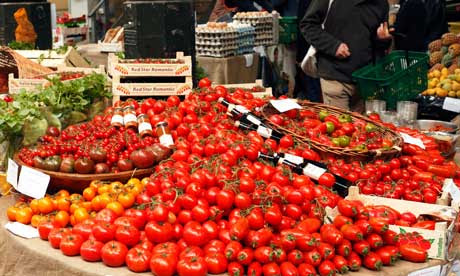 'We are living in the Age of Food' … stalls at Borough Market, London. Photograph: Alamy

On a crisp autumn evening in a north London street, a rôtisserie trailer is parked outside a garden flat, green fairy lights blinking on and off, warm chickens perfuming the air. A thirtyish hipster wanders out to where I'm standing with a friend on the pavement and drawls his unimpressed judgment of what is going on inside. "I think the arancinis are not quite spicy enough," he informs us, with an eaten-it-all-before air. "Could have more flavour, not really exotic." Right now I haven't the faintest idea what "arancinis" are (or that arancini, like panini, is already an Italian plural), but I nod knowingly while typing his thoughts into my phone, and my friend keeps him talking. "I thought the Korean burger was quite good," the hipster goes on, without much kimchi-fired enthusiasm, "but I think a lot of people don't make their food with enough shbang … They kind of cater to the middle of the road." Twenty-five years ago, he could have been an indie-rock fan bemoaning the blandness of chart music. Now he's a social-smoking, foodier-than-thou critic at a "Food Rave".

The name of the Food Rave is entirely appropriate for a modern culture in which food is the last ingestible substance you can indulge in with obsessiveness without being frowned on by society. Alex James, the Blur bassist turned gentleman cheese farmer and Sun food columnist, has said: "My 20th birthday party was all about booze, my 30th birthday was about drugs, and now I realise that my 40s are about food." And he is not alone. Food replaces drugs in the gently ageing food-fancier's pantheon of pleasure, and brings along with it traces of the old pharmaceutical vocabulary. You hear talk of taking a "hit" of a dish or its sauce, as though from a spliff or bong; and a food-obsessive in hunter-gatherer mode is thrilled to "score" a few chanterelle mushrooms, as though he has had to buy them from a dodgy-looking gent on a murky Camden street corner. Food is valued for its psychotropic "rush"; Nigella Lawson refers to salted caramel as "this Class A foodstuff". Yes, food is the new drugs for former Britpoppers and the Ecstasy generation, a safer and more respectable hedonic tool, the key to a comfortingly domesticated high.

Western industrial civilisation is eating itself stupid. We are living in the Age of Food. Cookery programmes bloat the television schedules, cookbooks strain the bookshop tables, celebrity chefs hawk their own brands of weird mince pies (Heston Blumenthal) or bronze-moulded pasta (Jamie Oliver) in the supermarkets, and cooks in super-expensive restaurants from Chicago to Copenhagen are the subject of hagiographic profiles in serious magazines and newspapers. Food festivals (or, if you will, "Feastivals") are the new rock festivals, featuring thrilling live stage performances of, er, cooking. As one dumbfounded witness of a stage appearance by Jamie Oliver observed: "The girls at the front – it's an overwhelmingly female crowd – are already holding up their iPhones […] A group in front of me are saying, 'Ohmigodohmigodohmigod' on a loop […] 'I love you, Jamie,' yells a girl on the brink of fainting." The new series of The Great British Bake-Off trounced Parade's End in the ratings, and canny karaoke-contest supremo Simon Cowell is getting in on the act with a new series in development called Food, Glorious Food! – or, as it's known among production wags, The Eggs Factor.

Read his full rave in The Guardian

I read the whole sorry, misguided rant. Sacrilege and proof one should never write on an empty stomach, Mr Poole. Just as the only thing that makes me want to take up smoking, again, after sixteen years, is the admonistrations of ASH, though I'm still in bed reading this, now on principle I have to get up and light the charcoal in my barbeque. A foody Chardon-day upcoming, I'm cancelling the work. If Mr Poole thinks he's in the vanguard of a revolution, well the counter to it is every meal.

Seriously, though, even if empty headed network programming didn't drive you to the Food Channel, a love of life would. Rick Stein, Hugh Fearney-Whatnot, and the glorious Nigella versus Destroyed in Sixty Seconds or The Ridges - I'll take the foodies every time thanks.

I found this rave - unenlightening...

I love food. I love cookbooks. Since I've been in my mid-teens, I've thoroughly enjoyed experiencing new tastes (hey! I'm the one who, at 15, introduced my whanau to garlic! 1962 if you want to know the exact date-)

But food is food. I do not confuse it with spirituality or social pretension or any other trendy writers forced assumptions to raise their own profiles-

we are homonids who can eat & digest a remarkable range of foods (not quite so many as rats) and thrive. Let us enjoy the extraordinary range of riches
available to some of us (wealthy folk by and large) and let the rest of us (literate comparatively wealthy types by & large) enjoy the books, the explorations by chefs...by all means, be informed about what you eat, and how it got to you in an edible condition, and make your choices about what you eat therebye.

I chose not to eat abattoir-killed meat way back in
my 20s, and I refuse to eat anything that isnt truely 'freedom farmed' (yep, that includes eggs)* or wild-caught/shot.